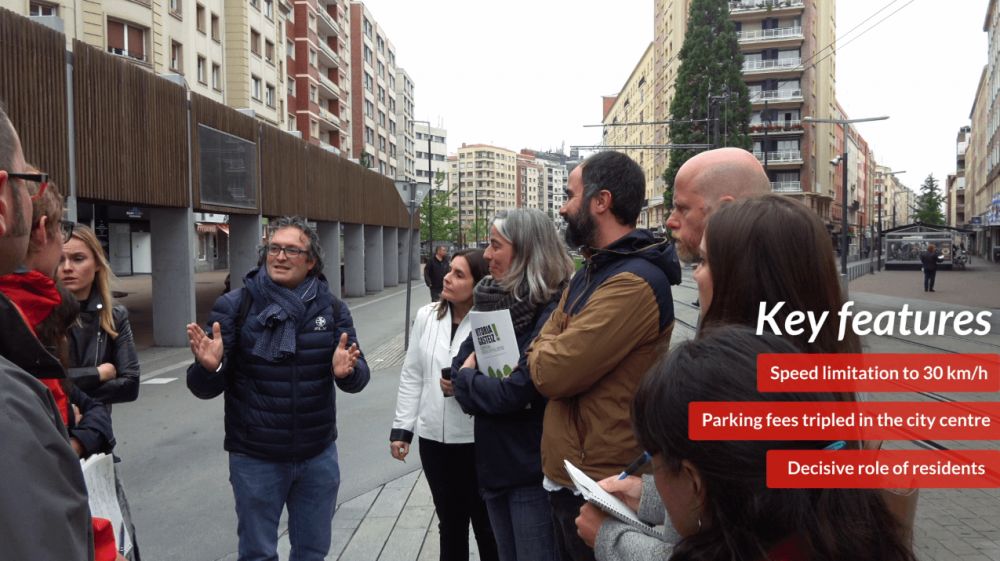 Think beyond the grid: video highlighting superblocks in Vitoria-Gasteiz launched

SMARTEES has launched a video highlighting the insights of its follower city visit to Vitoria-Gasteiz. During the visit, the cities of A Coruna, Lisbon, Porto, and Zagreb learned about the city’s success story in implementing sustainable mobility measures in superblocks.

Vitoria-Gasteiz began to work on its first Sustainable Urban Mobility Plan (SUMP) in 2006. An important component of the SUMP was its aim to transform public spaces into pleasant environments for people to enjoy and social interactions to take place.

As part of this decision, the city developed an approach for redesigning neighbourhoods in line with the superblock concept. A superblock is an urban innovation that introduces low-carbon mobility practices through the reorganisation of urban space. In Vitoria-Gasteiz, private cars and various forms of public transportation are kept outside each of the blocks, while the inner streets are re-designed in such a way so as to be used by pedestrians and bikes.

The city was divided into 77 potential superblocks, two of which have been fully completed, and traffic-calming interventions have been implemented in 17 superblocks. Among the superblocks that the city has already implemented is that of Sancho el Sabio, which was visited by the participants of the city visit.

Juan Carlos Escudero, Head of Information and Innovation for the Urban Sustainability Unit of the Environmental Studies Centre of Vitoria-Gasteiz, highlights that as a result of this initiative, “the situation for mobility and the local environment has improved a lot. And what is more important is that the people are enjoying it.” The benefits include having more attractive pedestrian areas, doubling the number of public transportation users, and reducing private car use by more than 12% in the last decade.

To learn more about superblocks and the SMARTEES city visit, check out the video here.