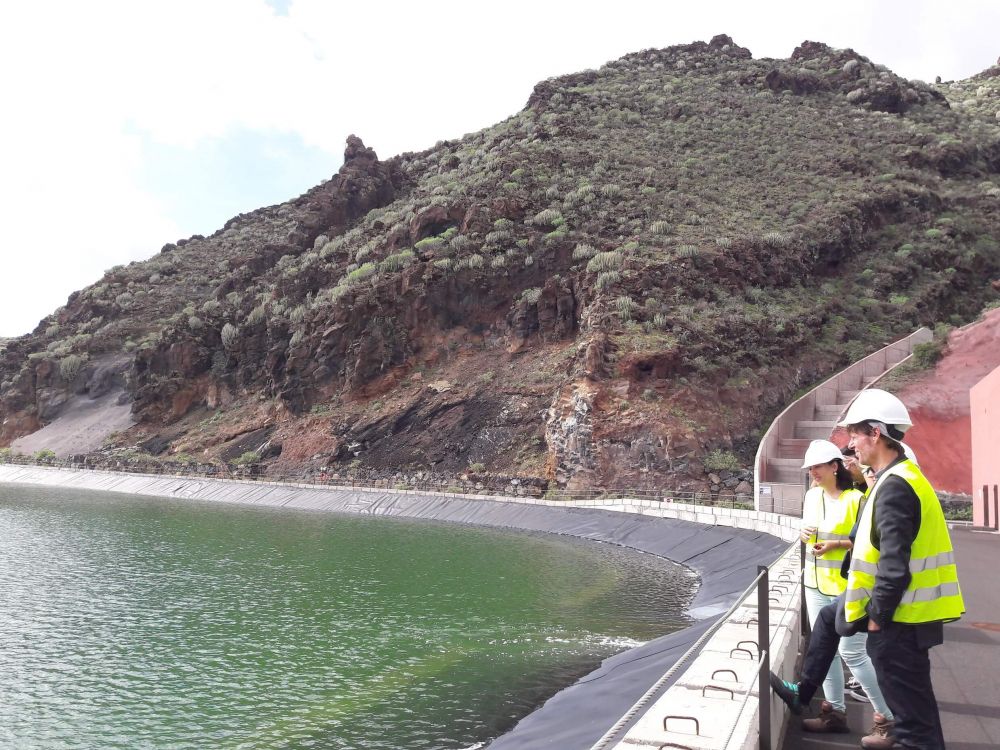 The third visit of the SMARTEES project gathered island representatives from Traena (Norway), Ameland (the Netherlands) and Comhairle Nan Eilean Siar (Scotland) on El Hierro, the smallest island of the Canary archipelago (Spain).

El Hierro strives for 100% renewable energy self-sufficiency through the combination of hydro and wind power. The windy climate and altitude drop on the volcanic island provide the physical conditions to achieve this goal. However, the trigger was the political consensus and will to tackle water and energy vulnerability through developing and implementing an early sustainability plan. Following the plan, the public-private partnership Gorona del Viento was set up for developing and realizing the hydro-eolic project.

In a nutshell, the project works like this: when the wind blows strongly, five wind turbines (11.5MW) produce electricity to cover the demand of El Hierro and to pump water from a lower reservoir to an upper big water-proofed volcanic crater. The water stored there is then activating hydroturbines to generate electricity in periods of no or low wind speeds.

As encouraging results, El Hierro achieved almost 50% electricity self-sufficiency in 2017, and the electricity was used in three desalination plants on the island. El Hierro now invests in the electrical car fleet and charging stations to slowly make its individual transport more sustainable as well.

The follower island representatives not only learnt and got inspired by the technical aspects of El Hierro’s project, but also discussed the importance of social innovation in the energy transition. This included citizen engagement to foster and implement a comprehensive energy transition for sustainable islands as well as political consensus and leadership. The participants shared with the island of El Hierro their experience of various financial, legislative, social barriers to the energy transition on islands, and, most importantly, their best practices. Suggested solutions included free energy advice for inhabitants, targeting climate ambassadors and local influencers among the population to raise awareness, and energy-efficiency campaigns in schools and participatory budgeting.

The follower island representatives will gather again next spring on the island of Samsø (Denmark) to learn and further exchange about island renaissance through renewable energy and citizen cooperatives.