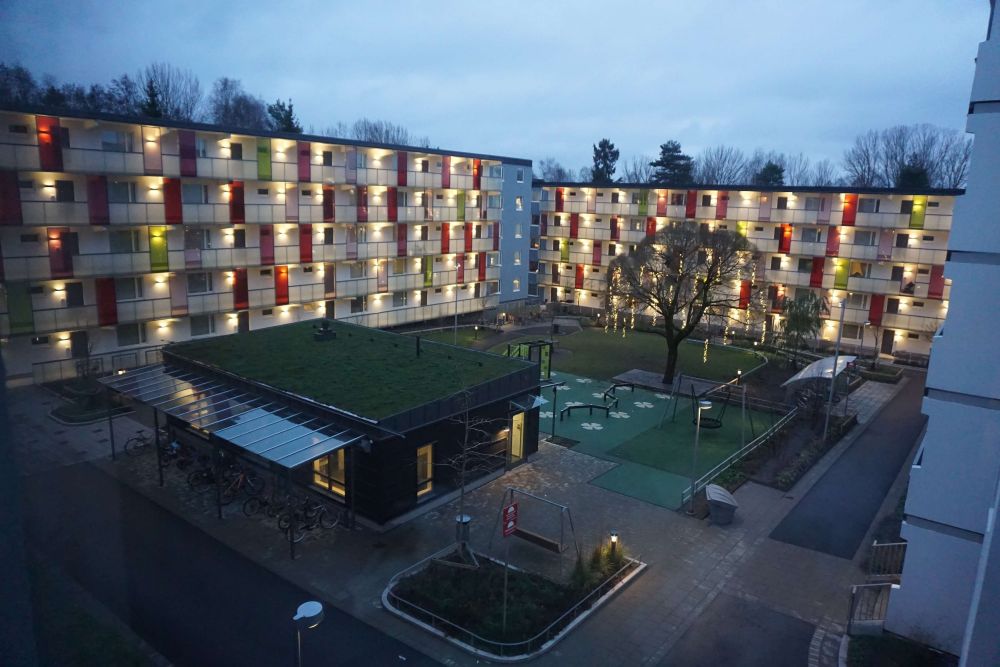 On 11 December 2018, city representatives from Lille, Cambridge, and Essen came together in Stockholm to share their experiences in district regeneration based on energy transitions. Stockholm, in aspiring to become a fossil fuel-free city by 2040, has undertaken a number of such projects. As part of the visit, participants therefore had the opportunity not only to learn about regeneration projects located in two different districts but also to see first-hand the various measures that have been implemented.

The first half of the day took participants to the Skärholmen district and familairised them with the efforts that have been undertaken to regenerate the area through the Fokus Skärholmen project, which is focused on social sustainability. Skärholmen was built between 1965 and 1975, a time during which one million new apartments were built in Sweden under the ‘Million Programme’. Since then, however, no greater urban development has taken place in the district until the start of the project in 2016. In implementing the project, the district will witness the development of 4,000 new housing units, which are at energy efficiency standards above the national requirements, and will come closer towards achieving its goal of being connected, varied, and vibrant. Particularly noteworthy is that residents were greatly involved in the early stages of the process through an online interactive tool, interviews that targeted normally underrepresented groups of society (women, school children, etc.), and public consultation. The urban developer who best addressed the priority topics highlighted through these exchanges won the right to develop the area.

During the second half of the visit, participants were taken to learn about a district located at the opposite end of the city, Järva. Built from 1966 to 1980, the area is comprised of 60,000 inhabitants, only 50% of whom are employed and 80% of whom have an immigrant background. In an effort to regenerate the district, several diverse initiatives with a focus on energy transitions have been implemented. The measures included both energy efficiency renovations of apartments, installation of photovoltaic panels as well as study sessions where residents could learn about sustainable lifestyles in their native tongues. As a result, Järva has achieved the renovation of seven energy efficient apartment blocks with a 50% decrease in energy use, 800 local employments, and the education of 5,000 people in sustainable lifestyles.