Look what the neighbours are doing!

The SMARTEES final conference on 14th September gathered experts in the field of social innovation in sustainable transitions together to discuss the project outcomes, replication and how the research field should be shaped in the future.

Cisca Wijmenga, Rector of the University of Groningen, opened the conference, reminding participants how important it is to study social innovation dynamics as it builds understanding of how to design successful sustainability transitions in cities. Christian A.Klöckner, SMARTEES Coordinator, echoed this sentiment and reminded that projects like SMARTEES are key in fostering interdisciplinary research with a robust empirical component. Christiana Marchitelli, from DG Energy European Commission agreed and pointed out that the EU will increasing focus efforts on bringing citizens on boar the energy transition. The European Commission recognizes that social innovation serves the environmental, economic, digital, cultural, sovereignty, and democratic priorities set by the Commission.

The SMARTEES cities presentations followed, with Terry Albrondafrom the virtual host Groningen City Council opening. The citizens of Groningen resisted the change of a busy car thoroughfare through a park, but gradual changes and discourse with citizens, especially by introducing temporary schemes, where citizens could experience the ‘car free’ park helped to shift the opinions, eventually transitioning Groningen to the pedestrian and cyclist friendly innovator that it is now.

Søren Hermanssen from Samsø Energy Academy, which managed to spark a transition with citizens on the island leading to 100% renewable energy use, discussed how it was difficult initially to argue for windmills initially, as people were very concerned about preserving the pristine environment, and nota actively concerned with the grander scheme of things. However, Samsø succeeded, because they involved citizens in the whole process and fostered ownership of the new energy assets. Campaigns calling for citizen’s support and reminding them of their power to change things are crucial for successful and sustainable transitions. Mai Muhammad from Aberdeen City Council followed suit, saying that such successful approaches should be recorded to support replication elsewhere. She highlighted that the agent-based modelling (ABM) done in SMARTEES on retrofitting district heating in Aberdeen helped to plan for transitions in other districts.

Juan Carlos-Escudero from the municipality of Vitoria-Gasteiz presented on the Superblocks introduced in the city, reminding that having a long-term approach is crucial, and informing citizens early about planned changes so they can adjust is a simple but effective step for fostering acceptance. Trevor Graham, working on sustainable urban transitions in Malmö, highlighted that sometimes there are political and structural problems in cities that one cannot overcome, and these need to be acknowledged, with the housing market in Sweden being a prime example. The restricted management, building and leasing of property resulted in housing shortages and segregation. He called for more private investment to boost developments to help create new and renew old districts. He believes that through awareness raising campaigns, collective action, market changes and thorough planning there is potential to create shifts. Through SMARTEES he was inspired by the creation of new business models, which help find new avenues to address structural homelessness.

From practice to research

Gabriele Quinti from Knowledge and Innovation, brought the Human Energy concept utilised in SMARTEES to the fore, reminding participants that whatever methodology is used an interdisciplinary research approach need to be flexible and adjusted to the specifics of each case study. Through holistic studies SMARTEES research has proven that even if conditions are different, certain common dynamics can be identified, helping to inform decision making on the policy level and inspire them. Adina Dumitru from the University of a Coruna, also stressed the need for flexibility in social innovations: “Allowing the project to change through the process of co-creation is very important”. She also reminded that trust among different actors has proven imperative to achieve sustainable transitions, with the SMARTEES cases showcasing that this truly works in energy- and mobility transitions. In addition to trust, transitions have to be just, Erica Löfström and Giuseppe Pellegrini Masini, from NTNU reminded. Social innovations need to incorporate justice in the processes, with ‘energy equality’ taking the concept further – in order to achieve lasting change. Effective policies and sufficient funds are key for success and social innovations need to be inclusive; top-down approaches have not worked well in marginalised communities. To engineer a social innovation Pellegrini Masini reminded participants one needs to collect the attitudinal drivers of all stakeholders and assess them. 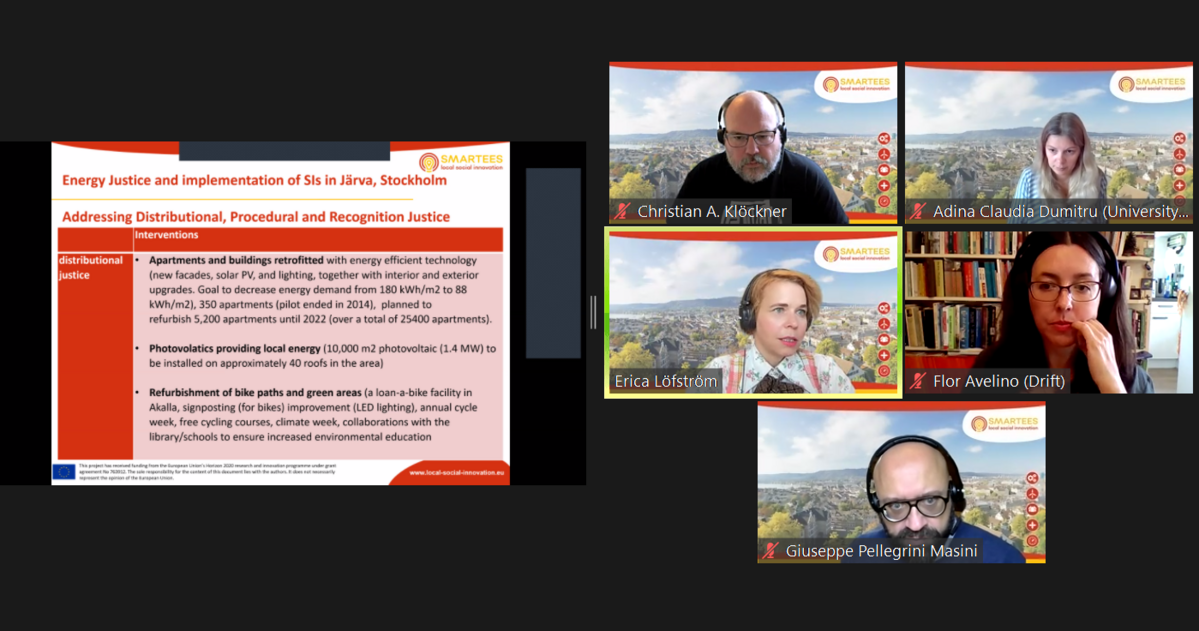 Flor Avelino, from DRIFT for transition, agreed that robust analysis and a careful approach is needed to ensure a lasting transition. She highlighted how beneficial cross-project research collaboration has been with fellow Horizon-2020 funded projects such as TRANSIT, UrbanA and SONNET. To achieve Europe-wide energy transitions one needs to form these kinds of partnership and share research results.

Wander Jager, from the University of Groningen, said that, once modelled, the SMARTEES case-studies showed that outcomes of social innovations were highly contingent and that information campaigns can have a strong impact to achieve acceptability in energy & mobility transitions. Maria Amparo Alonso Betanzos, from University a Coruna agreed that the process of modelling citizen opinions in SMARTEES helped develop specific approaches and create successful awareness and communication campaigns.

Gary Polhill, from the James hutton Institute presented on how fine-tuned agent-based modelling is - including variants such as weather conditions, agents lifespans, their economic situations and family forms. He took the modelling of heat-networks as an example – the modelling indicated that awareness raising is a highly effective tool to reach acceptability; in different scenarios it resulted on more heat networks installed, more households in heat networks and fewer households in fuel poverty. The modelling indicates new technologies are helpful, but endanger people joining heat networks as an alternative solution. Banning gas networks was not a successful approach, as it did not address fuel poverty and provided no avenues for more sustainable alternatives.

Petra Ahrweiler, from the Johannes Gutenberg University and president of the European Social Simulation Association, had assessed the work done in SMARTEES and found the modelling useful to help replication for other sites, lending to predicting and planning of different scenarios for energy- and mobility transitions. Even if it might be counterintuitive at first – in order to achieve sustainability one needs to think in complex ways to be effective, Petra reminded participants advocating for the use of ABM.

From simulations to testing

Niklas Mischowski and Elma Meskovic, experts at ICLEI Europe presented the SMARTEES Policy Sandbox Tool to participants, allowing them to test the innovative online tool, which gathers the experiences of SMARTEES case-study cities allowing users to experiment with different scenarios.

From testing to talking

The final panel discussion saw Silvia Casorran Martos from the city of Barcelona, highlight how the successful superblocks in Barcelona have shown that despite initial resistance, people have been happy over time due to the inclusive and informative approach taken: “It is clear we need more sociology and less engineering in implementing transitions” Casorran Martos stated. She had found the tools from the SMARTEES project very useful to plan social innovations. She also reminded people that bottom-up approaches stemming from the citizens should not be neglected - it is often the spark for changes, and policymakers do take note of citizen activism, and if anything, they should be more exposed to citizen feedback.Adina Dumitru called for continuously open feedback channels as well, not just over specific planned periods within projects. She mentioned that resistance needs to be taken seriously and that empowering people is crucial to foster acceptance, taking the COVID-19 pandemic as an example and mentioning that it has truly showcased that when citizens have not felt heard it has resulted in more resistance. Wander Jager agreed, and called for a balance between top-down and bottom-up approaches. Søren Hermanssen thought the gradual approach of developing policies actively down to the local- and then citizen level is key.

Image: The panellists in discussion

Gabriele Quinti pointed out that albeit it is important to involve citizens, one needs to remember that public authorities are should still act as such and help steer processes. There can also be dangers to citizen engagement, e.g. the Capitol Attack in the US as an example. He also reminded that one needs to look into what kind of citizens are engaged, is everyone included and why specific groups are involved. Giuseppe Pellegrini Masini reminded participants that he has seen the best results when there has been a genuine opening from decision makers to citizen organisations, allowing them to fully participate in sustainability initiatives. He called for more formalized spaces for citizen organisation, and saw municipalities as key actors to facilitate this. Andrea Kollman, from the Energy Institute at the Johannes Kepler University of Linz, from the research standpoint called for more synergies in how to express research objectives, communicate research, in order to maximise impact, and help build on existing research findings.

If the panellists could see one change manifest – what would they choose?

Andrea Kollman: “From an Austrian perspective a public vote on sustainability transitions would be great”

Søren Hermanssen: “Participatory democracy – leaving responsibilities for citizen organisation and the job for politicians to follow up on their outcomes”

Image: Christian A. Klöckner reflects on the SMARTEES process

SMARTEES coordinator Christian A. Klöckner closed to conference remarking that SMARTEES has truly been a great interdisciplinary research endeavour: “We have been able to show that different research perspectives can work together! We did research on social innovation first, then explored case studies, followed by social simulation modelling and the formulation of scenarios that we finally tested”. He outlines the projects contribution to the definition of social innovation as one of the foremost research achievements. Where SMARTEES truly added value in the landscape by showing how agent-based models can feedback into social innovation theory. A legacy that will carry on in the research of social innovations for sustainable transitions.

Find the conference presentations below:

Gabriele Quinti - a Typology of Social Innovations in Practice