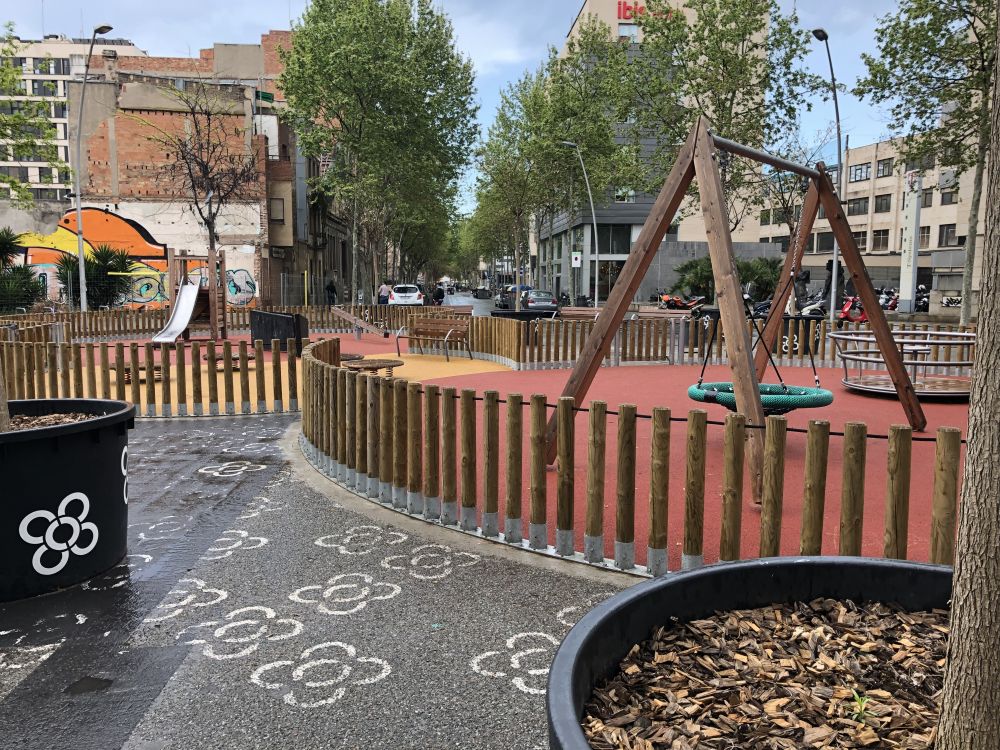 Filling streets with life - a lesson from Barcelona's superblock programme

The SMARTEES follower cities Lisbon and Porto made their way to Barcelona to take part in a two-day city visit designed to share knowledge and generate insights with regards to the topic of superblocks. During the visit, participants were able to deepen their understanding of the different steps Barcelona has taken to implement its superblock programme aiming to fill the streets with life.

Barcelona is a large and dense city comprised by 1.6 million inhabitants, a limited number of parks and hence a comparatively low ratio of green space per inhabitant of only 6.64m2. While the city has taken a number of steps starting already in the 1980s to improve the quality of life among its residents, quality of life indicators have highlighted that Barcelona still has a way to go before it can successfully achieve its aims. Standing in the way of this are a number of factors, included among which is high levels of air pollution, noise pollution, high rates of road accidents, and sedentary lifestyles further encouraged by the limited number of public spaces and parks. Shedding light on this last point is that 50-75% of public space in the city is dedicated to the car, while only 25% of journeys made within the city are made by car.

In an effort to tackle these issues, the City of Barcelona has decided to take on the implementation of superblocks as a strategy to give streets back to the daily lives of people. Superblocks are an urban innovation that introduces low-carbon mobility practices through the reorganization of urban space and thereby works to minimise the use of motorised modes of transportation.  Working from both the broader city level as well as the neighbourhood level, the city has adopted a three-step participatory process. First, city officials carry out agent mapping to better understand which actors are relevant in the particular territory and to identify a representative group of stakeholders. Secondly, the city works together with this group of key stakeholders to draw up a list of priorities and first actions to be implemented in the superblocks. Once these lists have been drawn up, the information is then made public, before the actors are then again reconvened into smaller groups to make any further changes before implementation.

The city implemented its first superblock in 2003 and in 2014 implemented a pilot programme, as part of which superblocks were implemented in five different neighbourhoods across the city. Under the current superblock programme, titled “fill the streets with life”, the city was distributed into 503 superblocks. The first pilot under this programme was implemented in 2016. The superblock was implemented essentially over a weekend, lead to significant backlash from residents and thereby also reinstating the importance of public consultations.  The city reflected back to this experience later when it began the implementation of the San Antoni superblock, which it started with several rounds of general meetings open to the public, targeted working sessions with a promotor group (‘grupo impulsor’), as well as several specific ones with affected stakeholders, such as local business owners. The participants from the city of Lisbon and Porto went on a tour of both superblocks in order to understand first-hand the implementation and workings of both. They further presented their own planned interventions related to superblocks, exchanged important lessons learnt with the City of Barcelona and engaged in an in-depth working session on the participatory process in Barcelona.