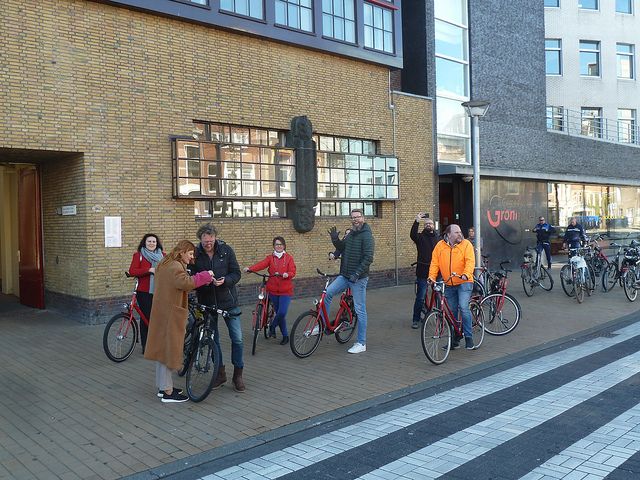 Groningen goes from a car- to a bicycle-city

The city of Groningen hosted the second SMARTEES follower city visit and workshop on social innovation for holistic mobility planning. On 27 February, city representatives from Budapest (Hungary), Burgas (Bulgaria), Trondheim (Norway), and Izmir (Turkey) came to the fifth largest municipality in the Netherlands – all eager to share about their own local mobility interventions and learn from innovative political-social processes that are transforming Groningen’s neighbourhoods for the better.

Over the last 50 years, Groningen, with its 200,000 inhabitants, changed completely – from a car-city to a bicycle-city where 60% of all individual transport is made by bicycle. Groningen has 145 km of cycling lanes, smart traffic lights with rain sensors, and priority is given to cyclists at crossings as often as possible. Bottom-up neighbourhood initiatives and co-creation efforts with the municipality have supported and co-directed these advancements, and continue to do so. This physical as well as socio-political transformation to low-carbon individual transport has been driven by a constant political vision for a healthy urban environment and living democracy. Today, Groningen has the third highest quality of city life in Europe.

In the late 70s, while the number of individual cars kept growing, a freshly elected left-wing party decided to change the trend. A controversial Traffic Circulation Plan was implemented, dividing the city centre in four sectors, excluding cross-sector circulation for cars, and making soft modes of transportation more competitive. In 1993, the main road dividing the biggest city park in two parts was closed down for cars for six months, creating a second strong reaction among the population against the political power of that time. After the temporary closure, the decision was given to the population via referendum to make the situation permanent or to re-open it to traffic. The results of the referendum highlighted that 51% of the population wanted to keep the park car-free. This very tight success became the catalyst of a public discussion on mobility and city development in general. Today, three out of four inhabitants trust, support, and even surpass municipal ambitions and efforts for further improvements in the wide field of sustainable urban development.

Terry Albronda of the City of Groningen explained the transformation of Groningen to a cycling city to the four follower cities and partners of the SMARTEES consortium before then taking them on a cycling tour of the key urban transformation spaces in the city. The tour included a look at and discussion around the first cycling roundabout in the Netherlands, the closure of the city center to main bus routes, and the co-existence of cyclists and pedestrians on the main shopping street in Groningen. During the afternoon, follower cities presented particular policy interventions related to holistic mobility planning in their cities. To dive deeper into a particular approach, Terry Albronda presented the “area oriented cooperation” process in Groningen, an approach which aims to increase the proximity between the municipality and the population and to develop the city from within the neighbourhoods.

A photo gallery of the site visit is available on Flicker here.