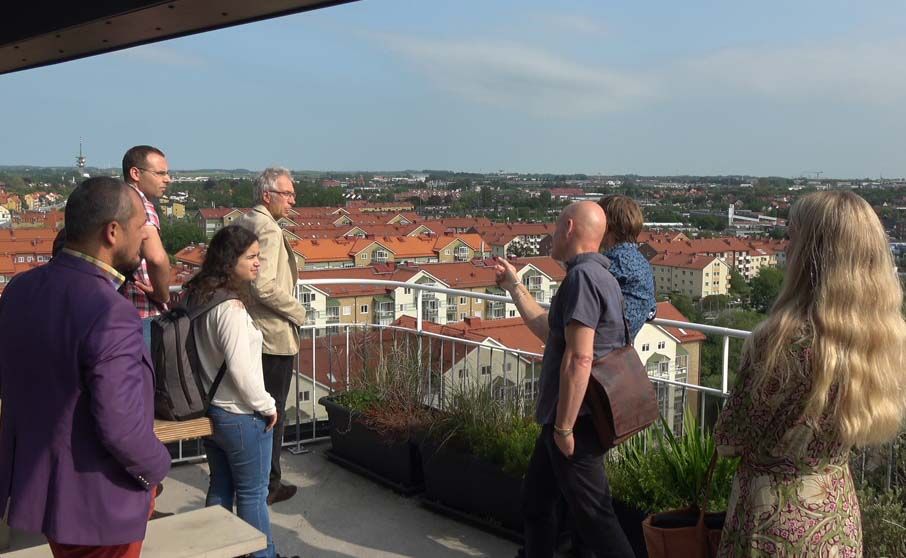 The city of Malmö (Sweden), the SMARTEES reference case for district regeneration, hosted a two-day city visit for municipalities willing to share knowledge and generate insights with regards to this topic. Eager to learn from Malmö’s experience, the SMARTEES follower cities attending the workshop were Banja Luka (Bosnia and Herzegovina), Cambridge (United Kingdom), Essen (Germany), Lille (France) and Jelgava (Latvia). The event took place on June 4 and 5, 2019.

During the stay, participants were able to deepen their understanding of the different steps Malmö has taken to implement its district regeneration programme, aiming to restore the disadvantaged neighbourhoods of Augustenborg and Lindängen and foster equality in the city. In a few decades, Malmö reinvented itself from a post-industrial deprived municipality to an eco-friendly, multi-cultural and knowledge-based city.

Malmö used to be a successful industrial city; however, the oil crisis in the 1970s caused closures of shipyards generating severe unemployment. In this context, the Augustenborg neighbourhood fell into a spiral of decline, as more people moved out, flats remained unoccupied and the residual population became marginalised. Moreover, the social problems of this district were worsened by the flooding from the sewage and drainage system due to a poor storm water management system.

The regeneration efforts in Augustenborg started in the 1990s, leading to Ekostaden Augustenborg project. The key aim of the initiative was to create a more socially, economically and environmentally sustainable neighbourhood. Most importantly, the programme intended to enable residents to take a leading role in the planning, design and implementation of the project, considering them as experts.

The main measures implemented were the improvement of the storm water management system, which prevents seasonal floods, and the increase in size and number of green spaces, in which green roofs are included. With regard to energy efficiency, the initiatives have focused in the re-insulation of the buildings, the re-organization of water and energy infrastructure, the implementation of renewable energy production, the improvement of public transport, the promotion bicycle use and the implementation of a carpool system.

The project had several impacts in many different dimensions, such as the decrease of the environmental impact of the area by 20%, the increase of the biodiversity in the area by 50%, the decrease of unemployment rate from 30% to 6% or the increase in energy efficiency by 20%. Moreover, there have not been any floods since the new storm water system was installed. Following the example of Augustenborg, other significant projects were developed in other Malmö districts, e.g. Lindängen.

During site visits to the Augustenborg and Lindängen districts, the workshop participants had an opportunity to see the result of the projects in situ. In Augustenborg, for instance, they visited Greenhouse – an example of the housing of the future. The building offers a new and sustainable approach to urban cultivation, garbage management system, mobility and energy efficiency. After the site visits, the participants exchanged experienced with interventions in their cities and received inspiring input from experts and peer colleagues.