Groningen has come a long way. The start of the transitional process related to the city's mobility system was marked by the implementation of the Traffic Circulation Plan in 1977. The implementation of this plan led to favourable conditions, which subsequently set the stage for numerous important developments. One of the tipping points that had a defining impact on the transport choices of citizens was the banning of cars in the Noorderplantsoen, a public park located in the city.

In the case of Groningen, you will have the opportunity to explore the evolution of a partially car-free mobility system as a social innovation and the different factors that led to the closing of the Noorderplantsoen park for cars. This case further considers alternative policy scenarios, to allow you to see where Groningen would have been now if some conditions been different. 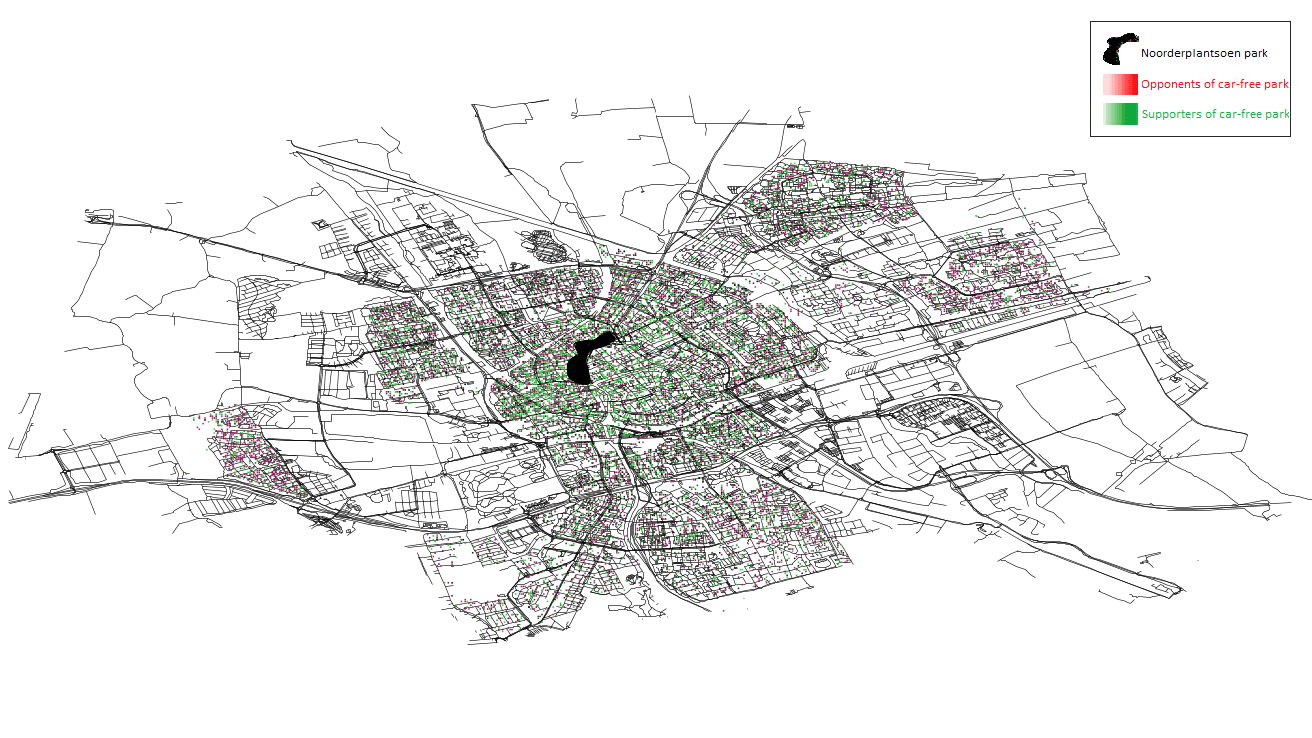 In the 1950's and 1960's planners believed that all traffic passing through Groningen should be routed via the central market of the city. Only later did people more and more start to realise that an increase in car traffic could have a negative impact on living conditions in Groningen. 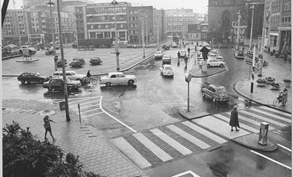 Central market at the end of the 60's © fotos.serc.nl

In 1975 the Groningen City Council was dominated by young members of the Labour Party (Partij van de Arbeid, PdvA). A key figure during this time was Jacques Wallage, a member of the City Council and the PdvA who was working specifically on traffic planning. The PvdA started to present the idea of banning cars in the Noorderplantsoen park in the early 70's and integrated it into traffic policy plans as well as the election programme.

Members of the City Council discussing the plan © Groninger Archieven 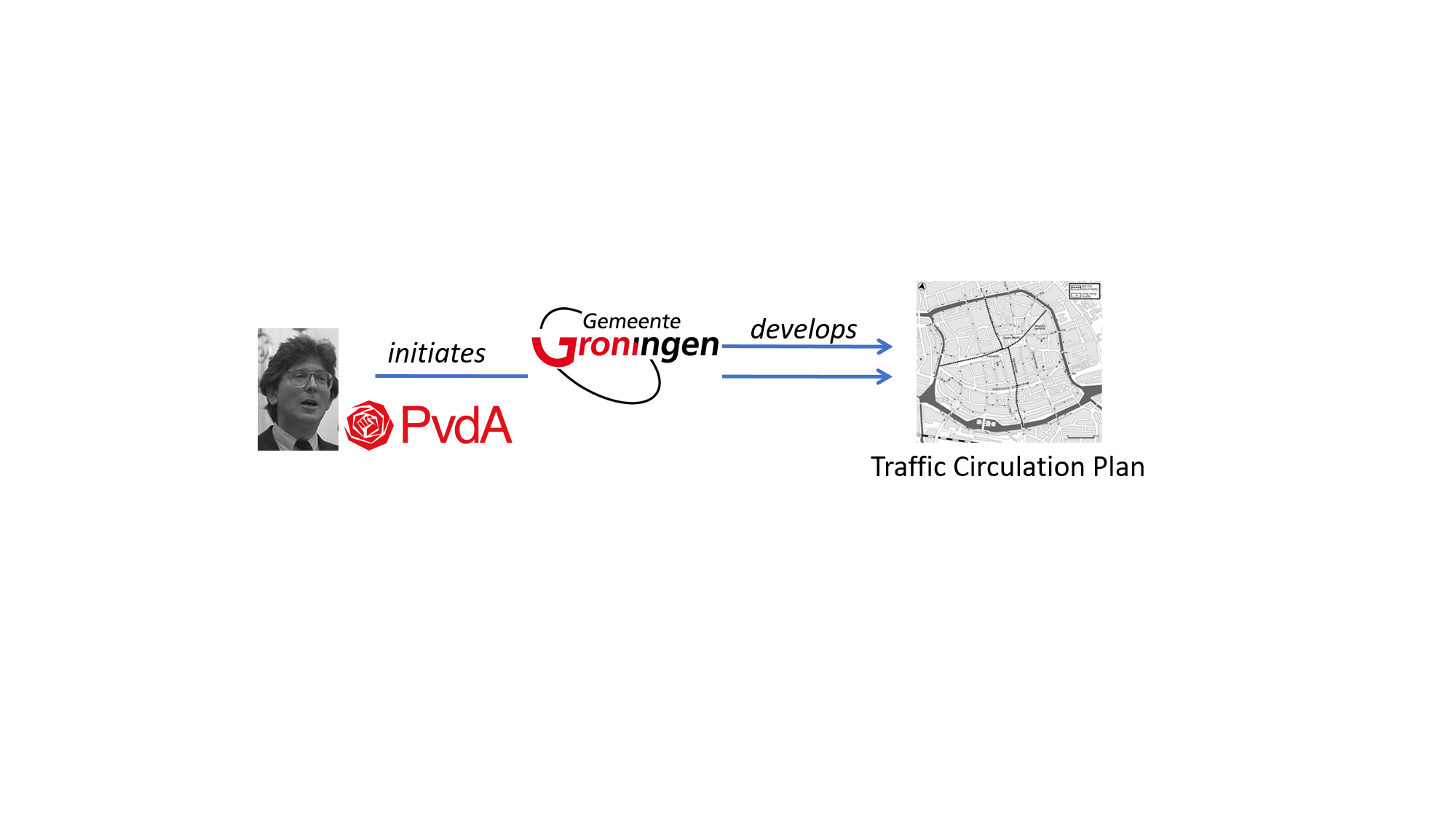 The shaping of the social innovation in this phase consisted of the development of the Traffic Circulation Plan, which divided the city centre into four sectors. The City Councillors that were members of the Labour Party decided to work on the division of the inner city into these four sectors, making it impossible to drive directly from one sector to another by car. The Traffic Circulation Plan was initiated by Jacques Wallage. 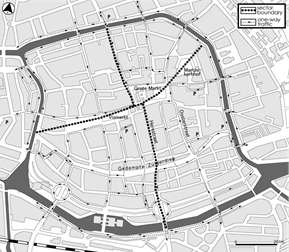 1977: The implementation of the Traffic Circulation Plan 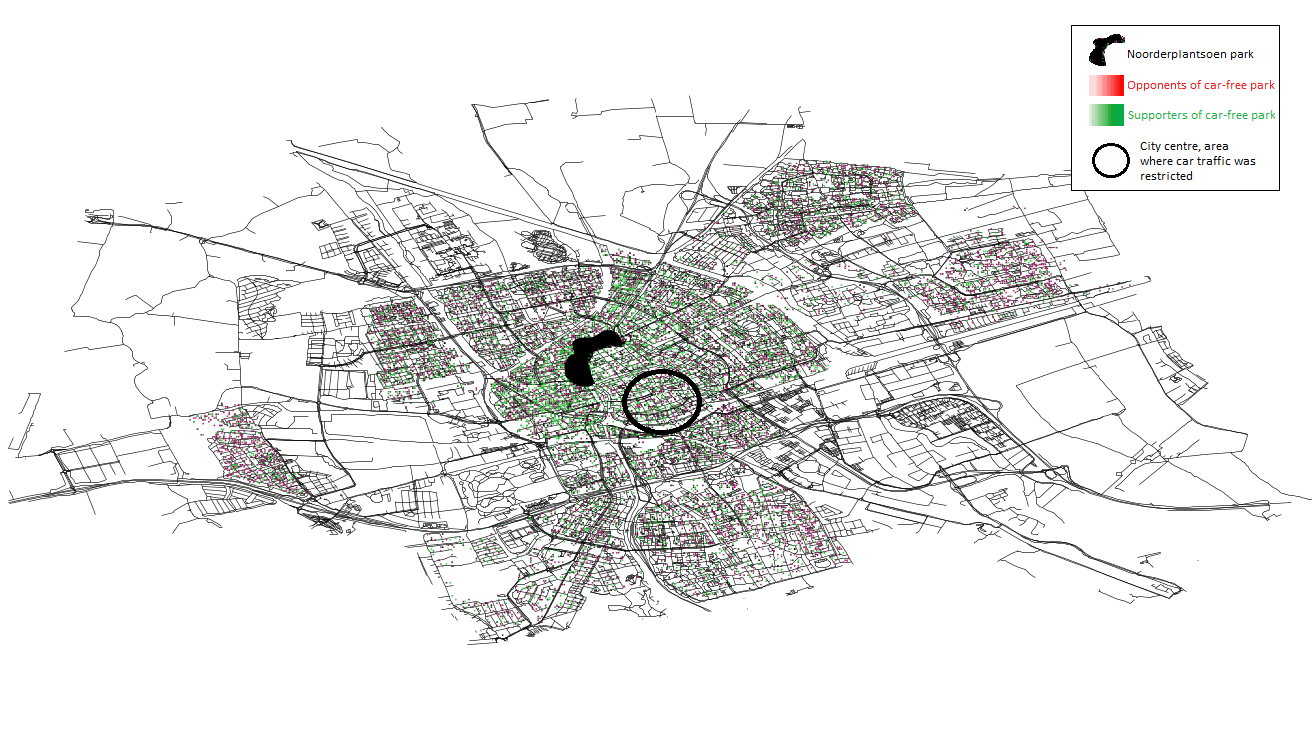 The start of the transitional process linked to the traffic system was marked by the implementation of the Traffic Circulation Plan in 1977. The implementation of the plan meant a restriction in the movement of cars in the city centre, in an effort to make space for public transport, cyclists, and pedestrians. Discussions about changing the movement of traffic in the Noorderplantsoen park began during this period, approximately twenty years before the park was eventually closed for car traffic.

Media played an important role in voicing different opinions and keeping traffic policy on the agenda and in the public debate. Shopkeepers and their associations, in particular, protested against the closing of the city centre for cars, as they were afraid of potentially losing customers.

Despite the protests, the Traffic Circulation Plan was implemented in 1977. The determination of the Mayor and City Councillors allowed for the restriction of car traffic in the city centre and the creation of space for cyclists and pedestrians. 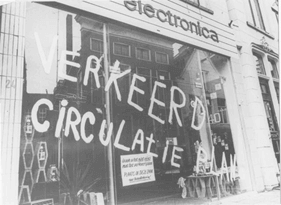 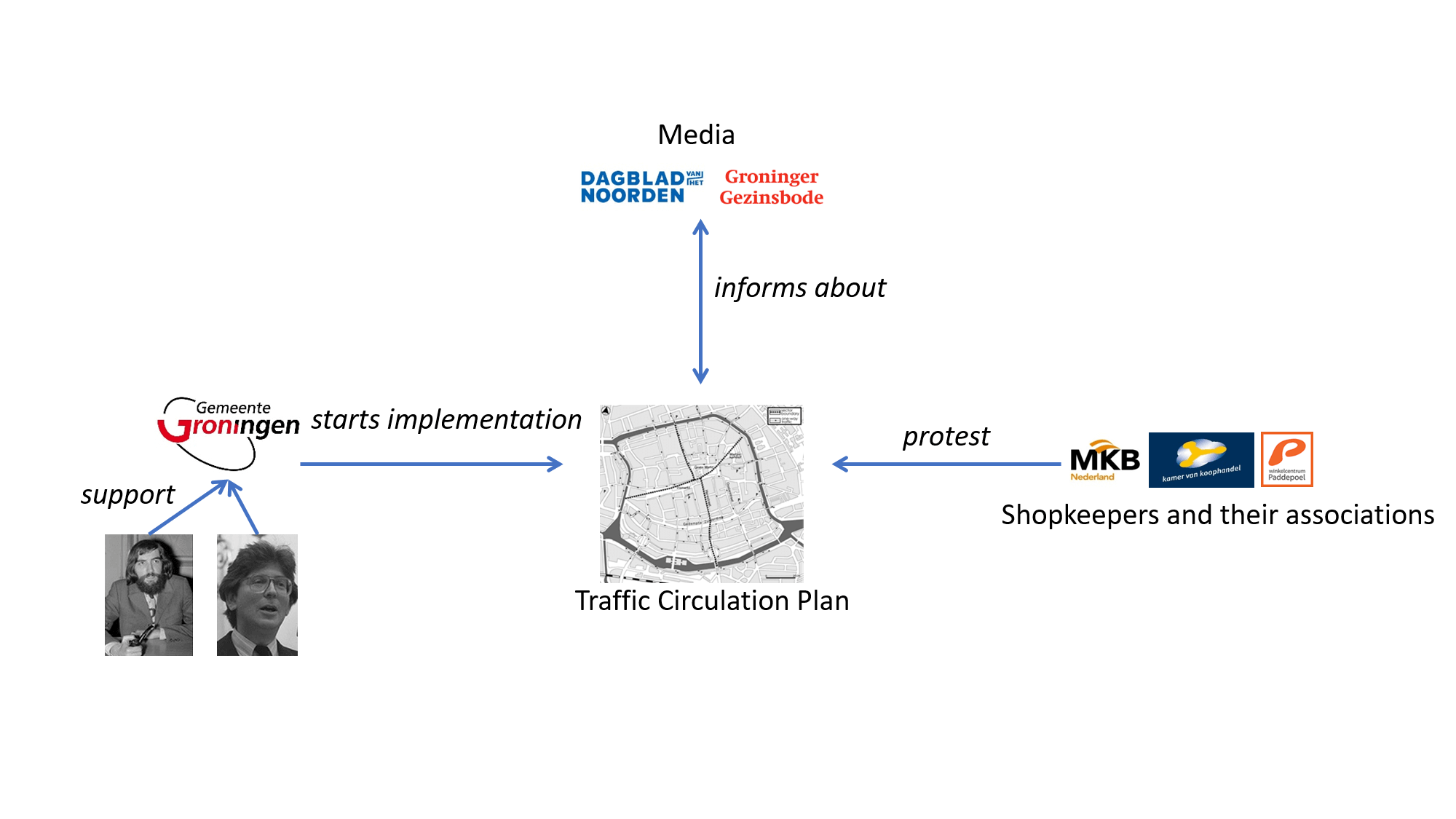 Numerous important developments were enabled due to the favourable conditions that were fostered by the implementation of the Traffic Circulation Plan: management shifted from car-centred planning towards a holistic perspective on traffic. This shift emphasised the importance of quality of life in the city, and contributed to a mind-set that led to the implementation of high-quality infrastructure for pedestrians and cyclists. The resulting favourable conditions benefited further development and adaptation of infrastructure and had a defining impact on the transportation choices of citizens, as cycling became the safer and faster option. 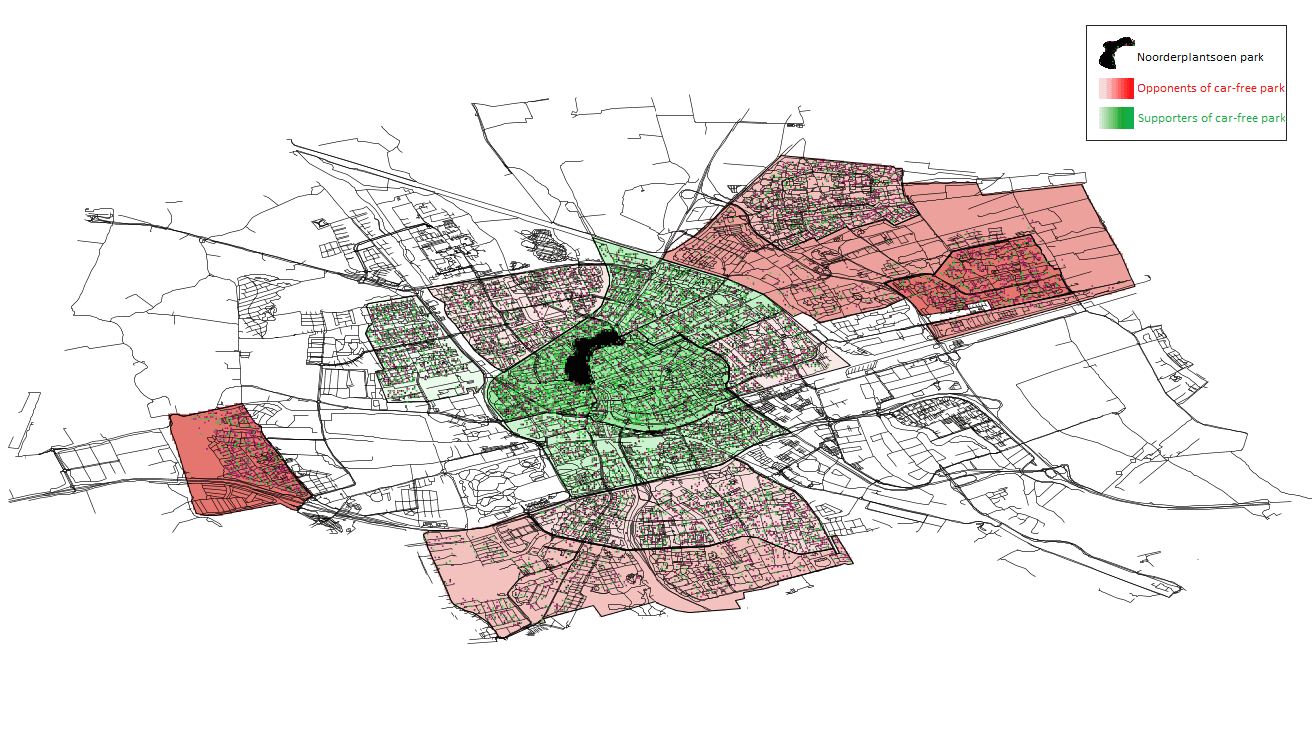 Despite the implementation of the Traffic Circulation Plan, the traffic situation became more problematic over the years. In particular, the sharing of the road by cars and cyclists turned out to be unsafe.

The road in the middle of the Noorderplantsoen park, going from south to north-east, connected and still connects the north-western part of the inner city with the north of the city. The road is a popular commuter path, especially during rush hours. During the time, this road was increasingly used by cars and cyclists, in addition to large numbers of pedestrians that were visiting the park. Therefore, the quality of the Noorderplantsoen as a park decreased due to increasing emissions of nitrogen oxide and fine particulate matter, noise pollution, and – most importantly – compromised safety, especially for children that were playing in the park. 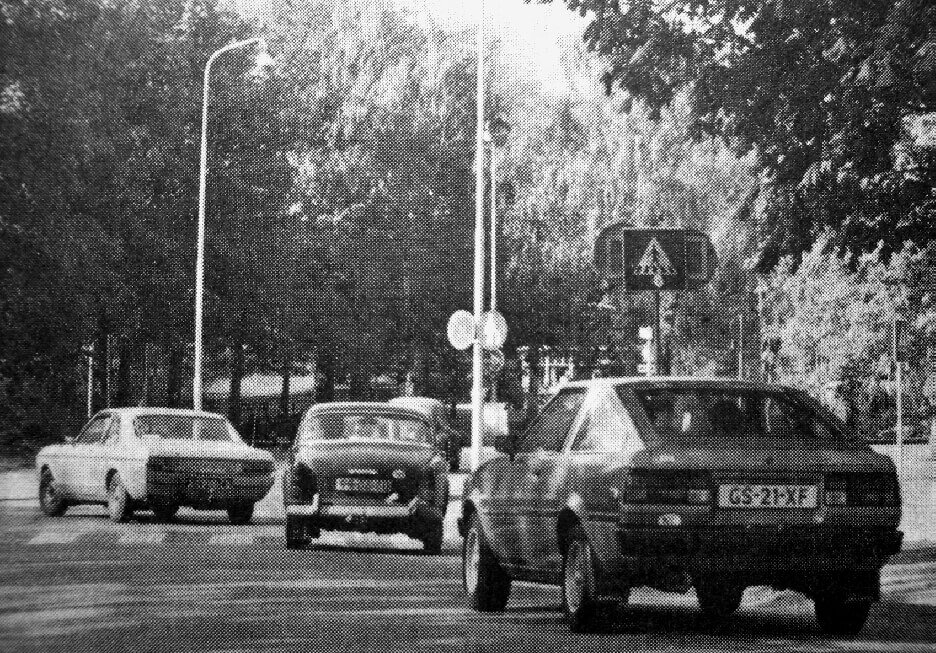 These three different groups engaged in discussions with the municipality. Citizens associations and neighbourhood organisations contributed to achieving an acceptable approach. Important citizen associations that were involved were the cyclist union (Echte Nederlandse Fietsersbond, ENFB) and ROVER, an organisation representing public transport users.

Various political parties that were governing Groningen had conflicting visions about the future of traffic planning. The Labour Party (Partij van de Arbeid, PdvA) incorporated the plan to close the Noorderplantsoen park for through traffic in its municipal election programme for the years 1978-1982. Within the administration, the department of Urban Development and Housing (Dienst Stadsontwikkeling en Volkshuisvesting, DSenV) was responsible for traffic planning and supportive of a car-free vision as well. 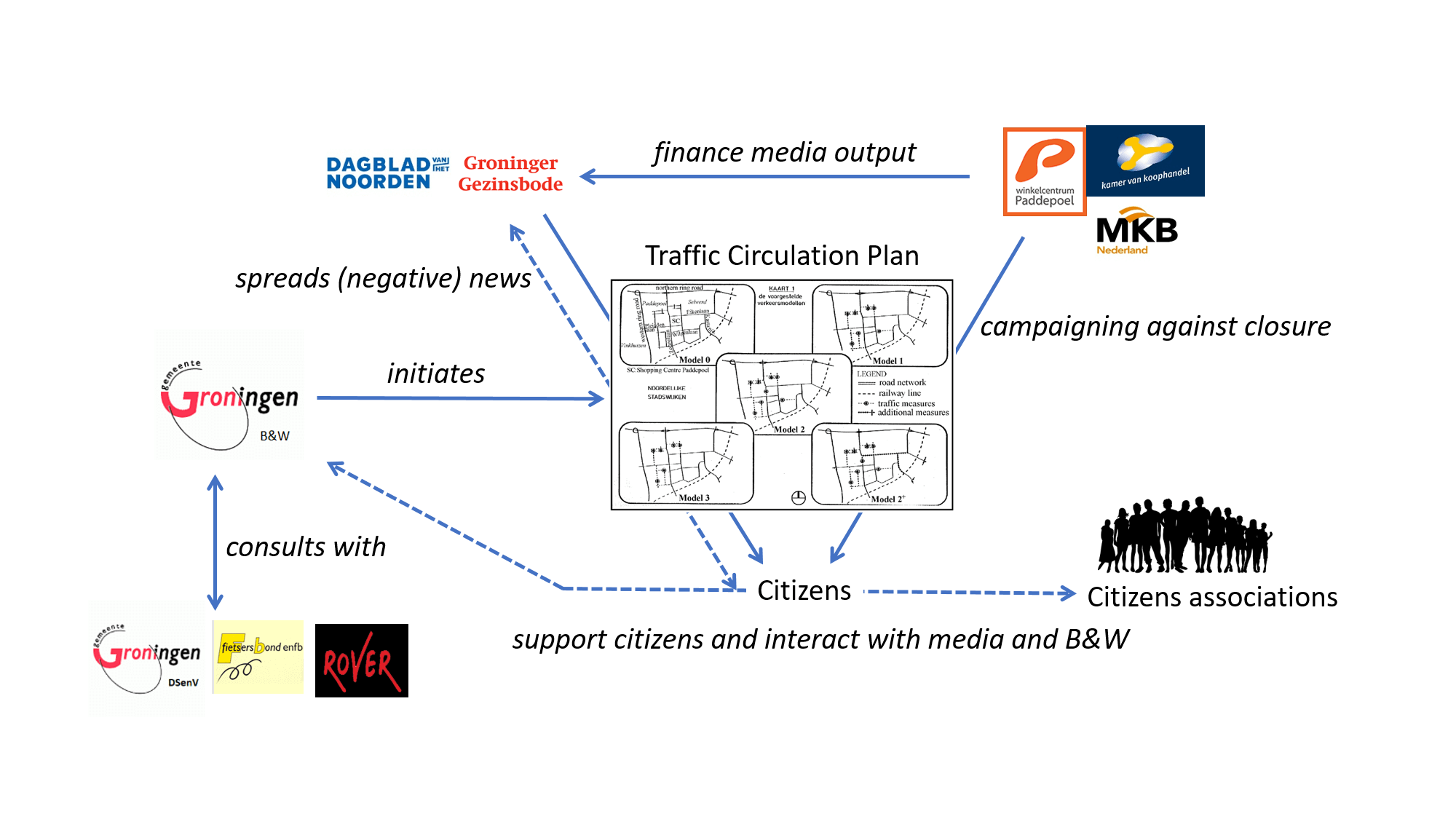 In the next municipal election that took place in 1982, the Labour Party (Partij van de Arbeid, PdvA) won substantial seats in the City Council and, thus, had the public support to be able to move forward with closing the park for car traffic. Throughout the 1980's different working groups developed scenarios and alternative traffic plans as part of the decision-making process. These were consulted on via public hearings, discussions with the shopkeepers and their associations, as well as with citizen associations. 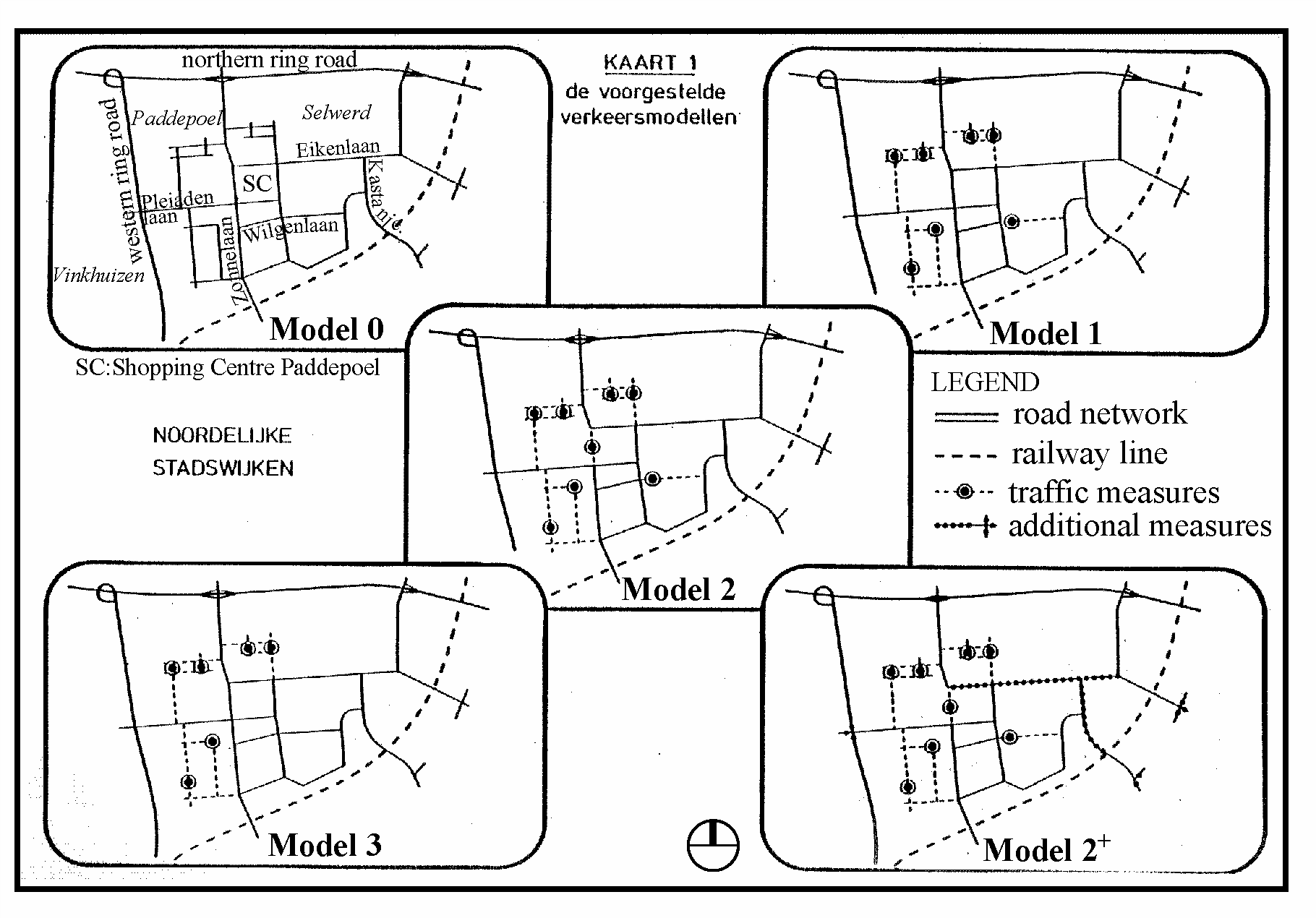 The shopkeeper associations continued to campaign against the ban and utilsed paid media content to influence public opinion. 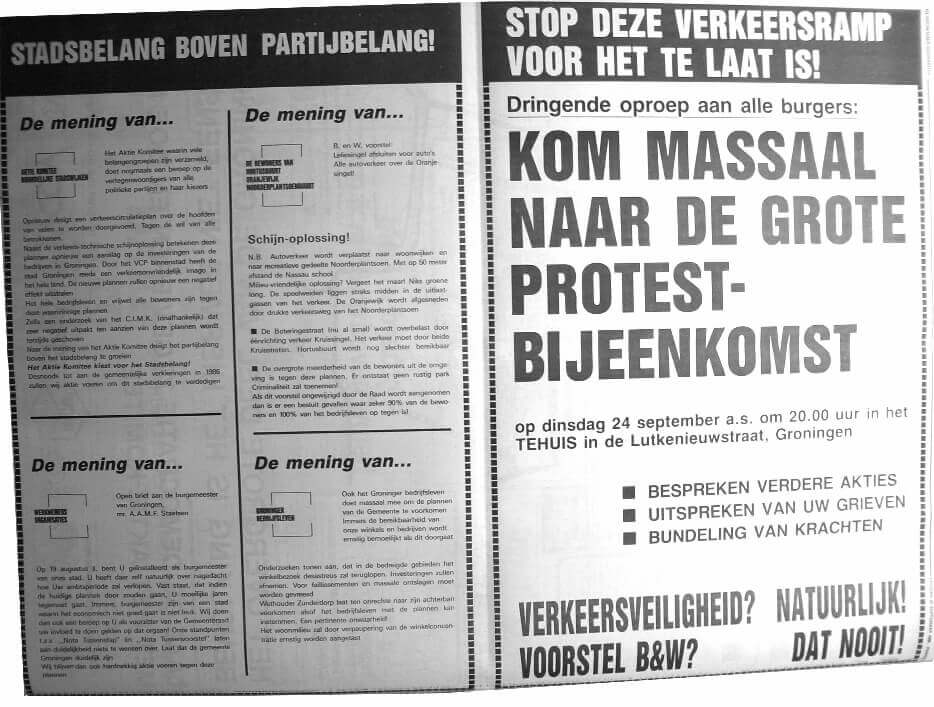 A cry against the Decision-Making Plan © Gezinsbode, September 20th, 1985

After long deliberations, a compromise was reached and a decision was made to pilot a car ban over a period of a year. 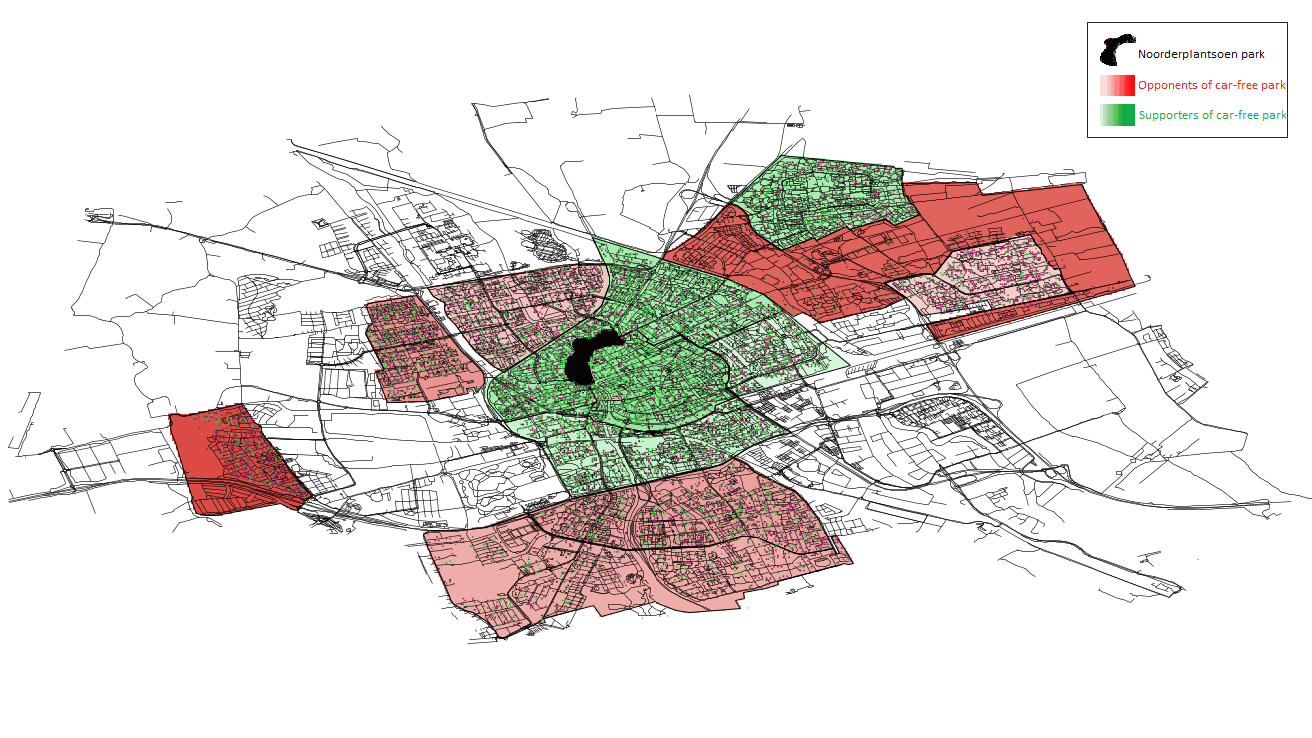 A test period of one year was implemented in 1993, when the park was closed for through car traffic. The temporal nature of this was expressed by having a steamroller partly blocking the entrance. 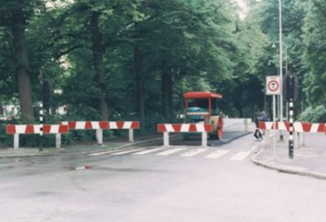 During the pilot year, the population of Groningen could actually experience the impacts of the intervention on their lives. It was in this year that the idea of a referendum emerged. This was the first advising referendum ever to be held in the Netherlands. The local population could either vote for or against the permanent closure of Noorderplantsoen for car traffic.

The idea of a referendum was largely born out of the D66 political party. City Councillor Henk Pijlman, also a member of the D66 Party, suggested it in line with the party's general promotion of referenda all over the Netherlands for democratic renewal.

The City Council and the Mayor worked hard to reach a compromise between the different groups, who had conflicting interests. They wanted to let residents decide.

The local newspapers had mainly been conveying negative messages about the consequences of closing the park for through traffic (partly linked to the paid content by shopkeeper associations).

Shopkeepers and shopkeeper associations kept campaigning against the closure of the park. The possibility of losing income and, thus, also jobs was a point of concern amongst trade unions, which opposed the car ban at the onset.

Neighbourhood resident associations were established to lobby for their favoured option. Most of them advocated for the closing of the park for through car traffic, for which different motives existed (cf. actors description in the previous phase).

The citizen associations Echte Nederlandse Fietsersbond (ENFB) and ROVER lobbied for closing the park to car traffic also by writing petitions to the local government. 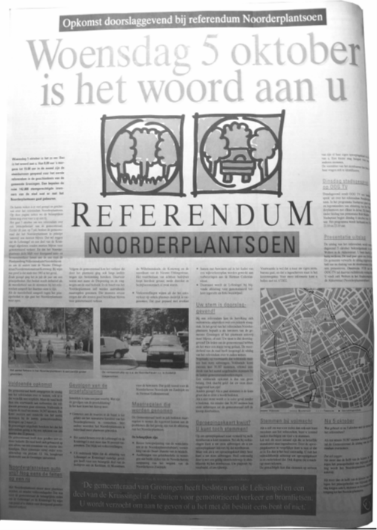 A call to vote during the referendum © Gezinsbode, October 3rd, 1994 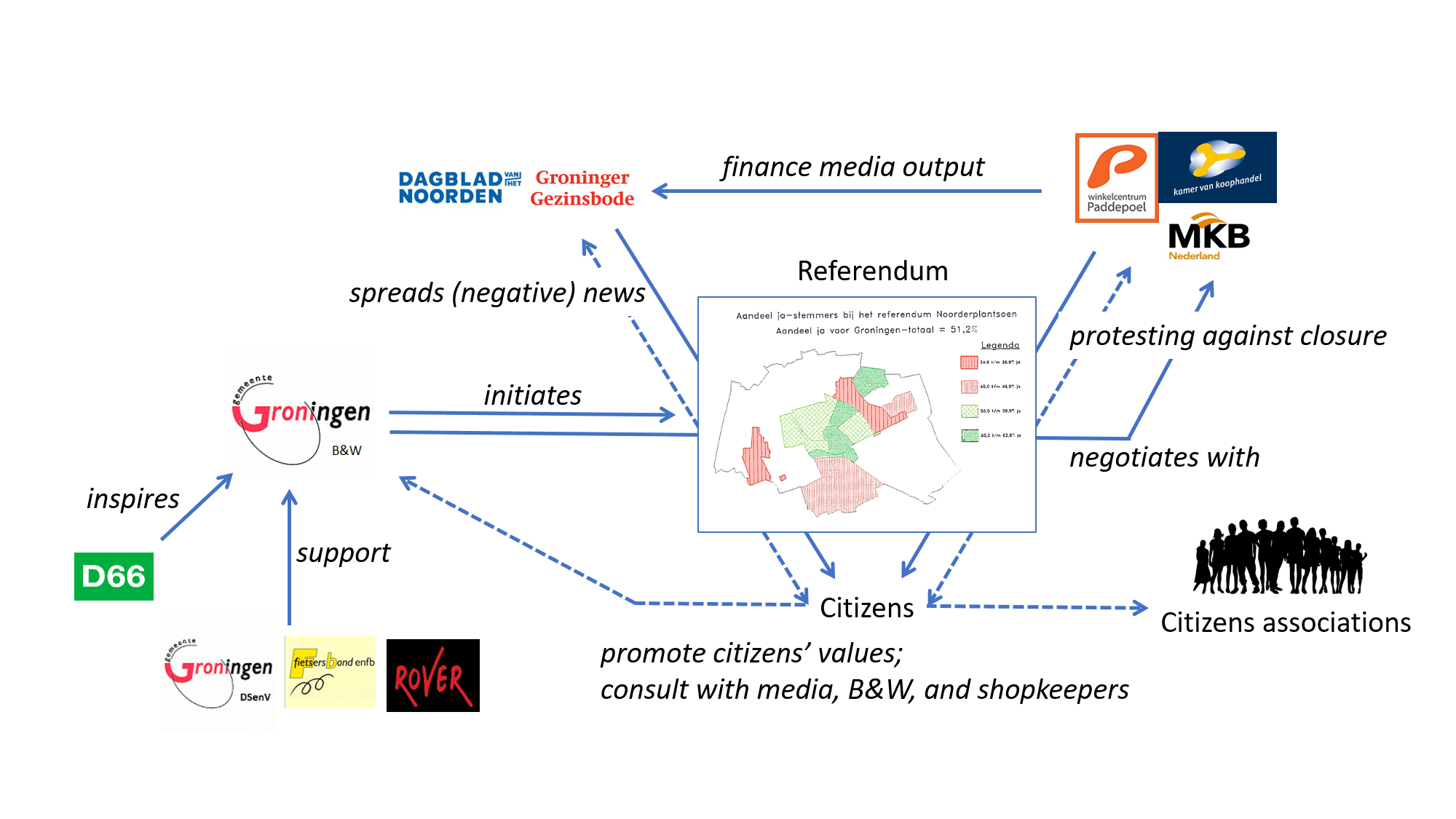 On 5th of October 1994, a majority vote of 50.9% decided in favour of a permanent closure of the park to car traffic. Following this outcome, discussions took place on the plans associated with the closure. 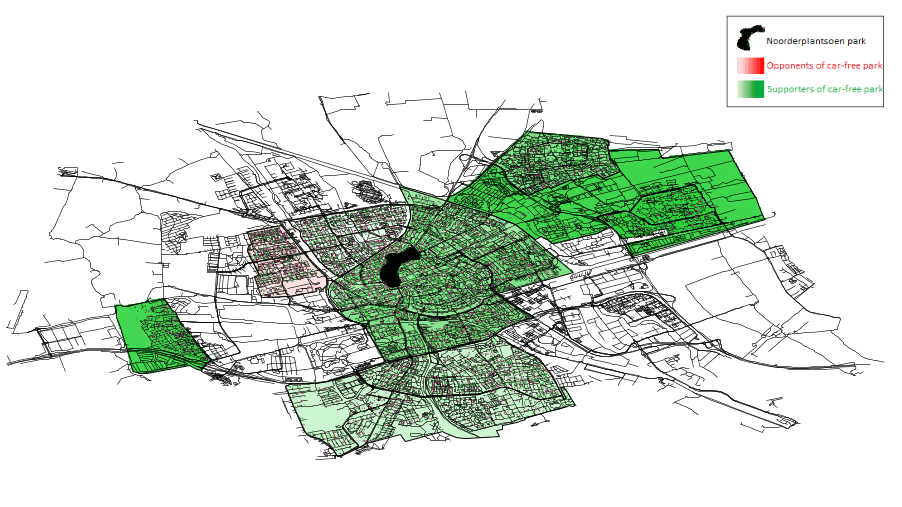 Following the decision to close the park for through car traffic, the Noorderplantsoen park is currently used by many people from the neighbourhood for leisure. In a 2015 European Union survey on the quality of life in 79 European cities (Flash Eurobarometer, 2016), 94% of Groningen voters reported to be (very) satisfied with public space as well as with air quality. 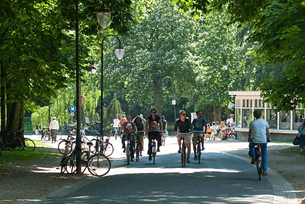 Different citizen interest groups make use of the park, be it for leisure time, for cultural activities, or environmental protection. For example, in August an annual 10-day theatre and music festival (Noorderzon) is organised. The ecological quality of the park is carefully monitored and cared for. 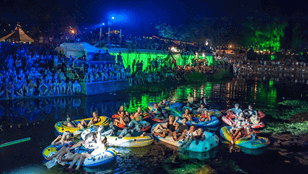 The Noorderzon festival in the Noorderplantsoen © Simon de Leeuw

Tensions remain regarding the different functions of the park. Nonetheless, despite some conflicting interests, today barely anyone is in favour of re-opening the park for cars. The system has transitioned into a new, car-free state.

Finally, the referendum on the Noorderplantsoen park was the first and constituted a new instrument for decision-making that was followed by other referendums, such as a 2001 referendum on building a parking garage (rejected) or different referenda on the development of the "Forum", a cultural centre that replaced a parking garage. Referenda can be said to have helped create a livelier political culture in the city, contributing to urban development plans. 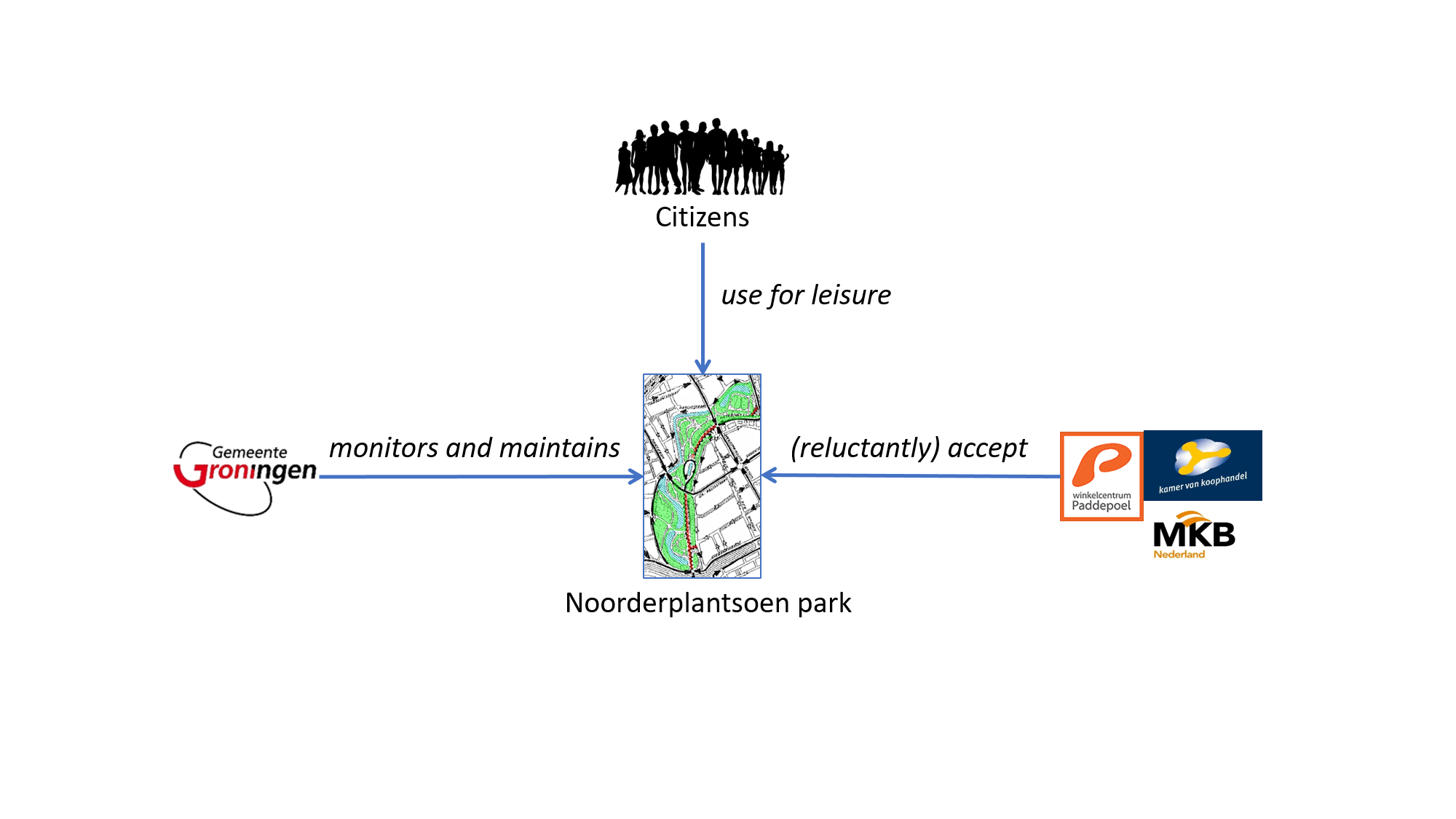 In the exploration section you will be able to take a look at some alternative policy scenarios in the case of Groningen – and how they have been modelled using Agent-based Modelling (ABM). Before you explore the videos, find out what ABM is about in the introductory video below.

Now, you should be ready for the policy scenarios. For the Groningen case, you can explore a baseline video run, replicating what really happened, as well as three alternative scenarios. Each scenario looks at the impact of a specific measure or event that deviates from what has factually happened in the past.

We hope this Policy Sandbox Tool storyboard provided some interesting insights and ideas for supporting energy and mobility transitions.

For a final refection on the ABM models that you have seen in the exploration section, see the video below.

For more information on the cases, we invite you to take a look at the following resources:

BACK TO ALL CASES