Stockholm is the capital of Sweden and has a population of close to one million inhabitants. Järva, located north-west of central Stockholm, is a peripheral neighbourhood surrounded by a nature protection reserve. It can be considered a disadvantaged neighbourhood with social and economic challenges: unemployment (>30%) and segregation, and conflicts, hostility, as well as violence involving police action and gangs have been known issues.

The Stockholm City project "Vision Järva 2030" (Järvalyftet) was initiated in 2007 and had four main focus areas: 1) improved housing and neighbourhood variation, 2) education, including language, 3) increased job opportunities and entrepreneurship, and 4) enhanced safety in the neighbourhood. In "Vision Järva", however, the environmental sustainability and energy efficiency components were missing. The project "Sustainable Järva" was subsequently set up as a response to the programme’s shortcomings.

The case of Stockholm illustrates the process that was undertaken in Järva and includes alternative policy scenarios to showcase what the situation could have potentially looked like had something been different. 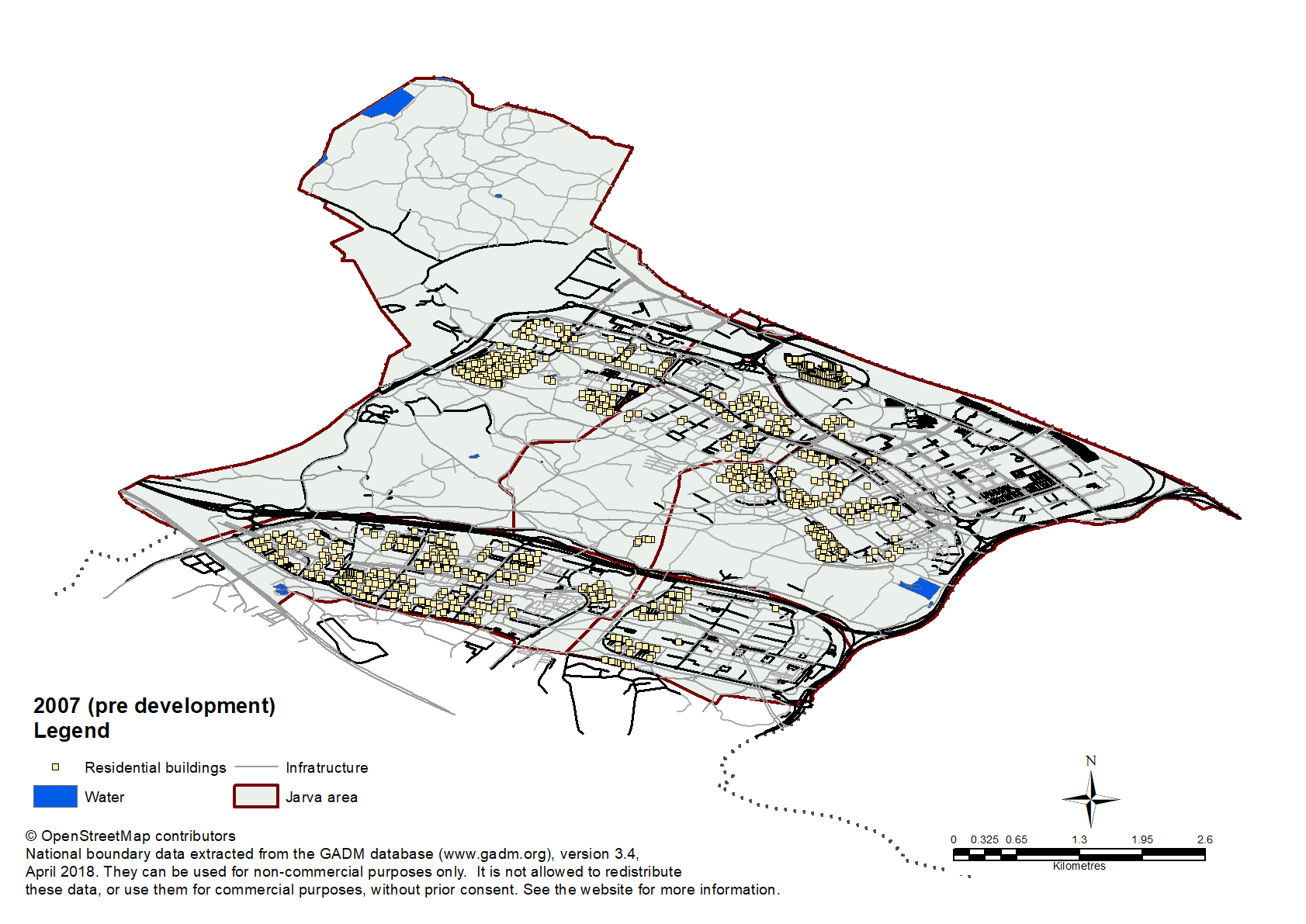 Järva was built between 1965 and 1980 as part of the "million homes programme" to meet the housing shortage at that time. Järva has a population of around 60.000 residents that live in approximately 25.000 rental apartments, many of which needed to be refurbished when Sustainable Järva was initiated. The buildings that were in the worst condition were 10-15 storey apartment buildings, each comprised of about 250 units.

The public housing company Svenska Bostäder, owned by the City of Stockholm, was commissioned to carry out the refurbishments of the selected buildings.

Local residents were the key target audience of the refurbishment plans, but they did not play an active role in the beginning.

The city initiated Vision Järva 2030, which focused on the technical retrofitting of the housing stock in Järva. After drafting the first development plans in 2008, an invitation brochure was distributed to invite residents to participate in the development of "Vision Järva 2030". Communication, however, happened very much top-down and did not reach the intended audience, which had severe effects (see next phase, context box). 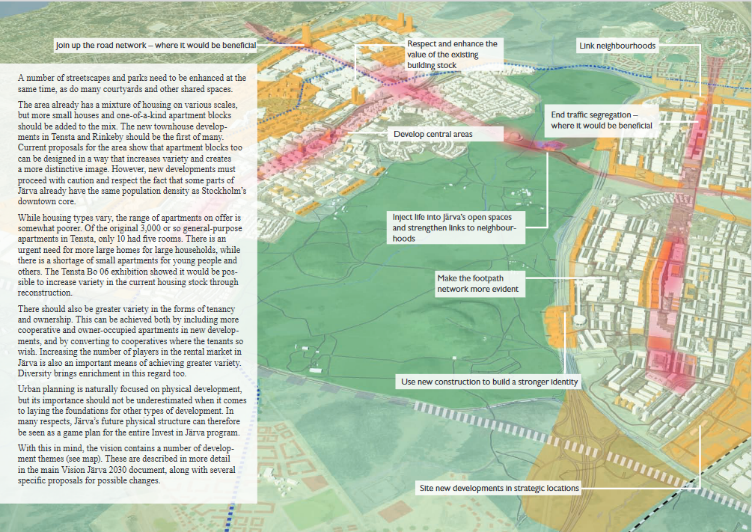 2009-2011: Initiation of the "Sustainable Järva – Re-building the Suburbs" project 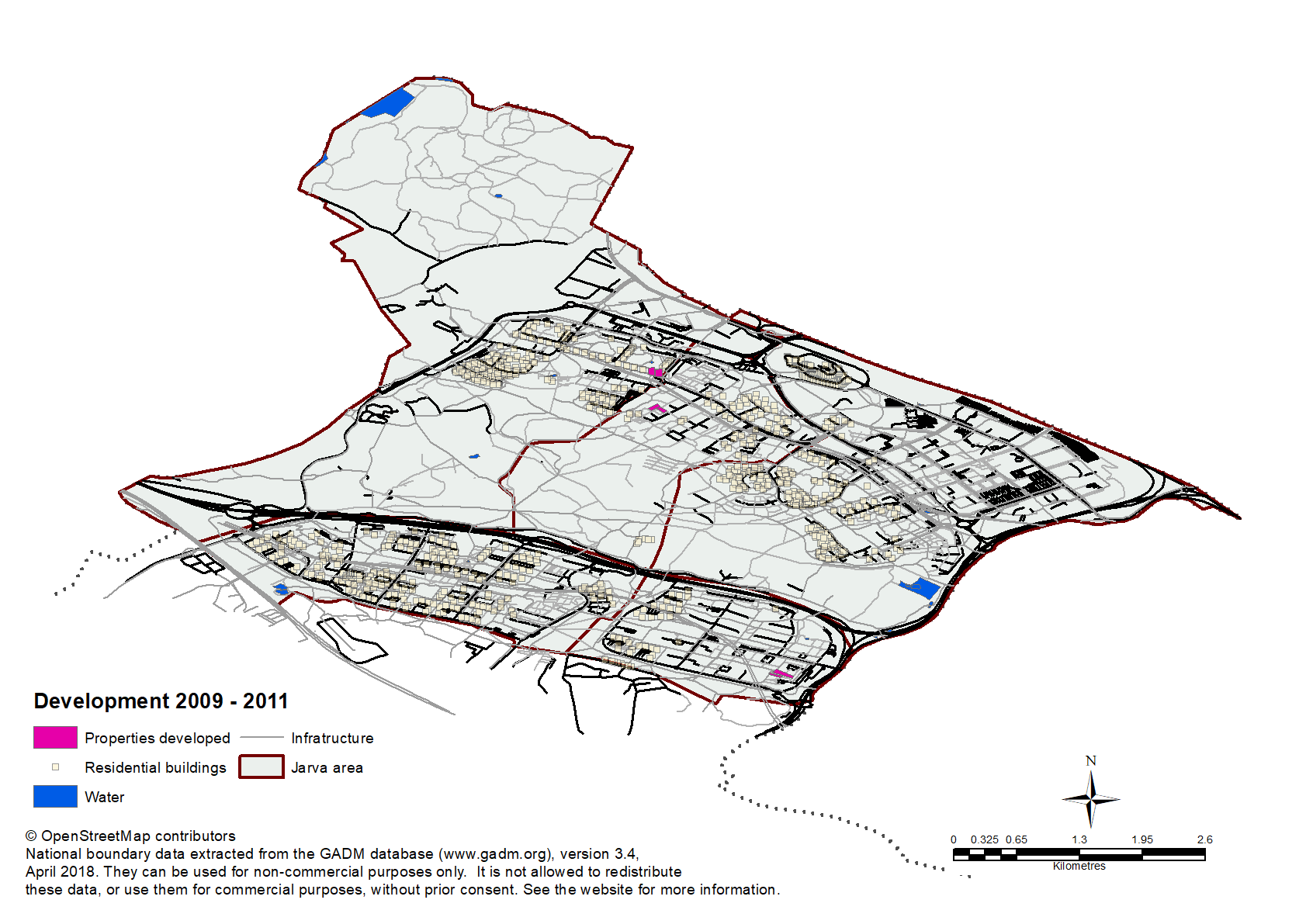 Early experiences with "Vision Järva 2030" had been negative: plans for renovation and building were presented to the residents without establishing the plans and ambitions together with them in advance. The tenants received letters from Svenska Bostäder that simply stated that they would have to move in order for the upgrading to take place. These letters provoked strong reactions from the residents of the area. The top-down and distant way of communicating, the idea that people would have to move out of their homes, and that residents were not informed about the possibility or risk of increased rent created a situation known as "the egg and tomato war" – as the residents threw eggs and tomatoes at official representatives. This initial approach considerably harmed the trust and relationship with the residents. The letter from Svenska Bostäder was sent at least partly because one had misjudged the level of place attachment that the residents of Järva actually had. 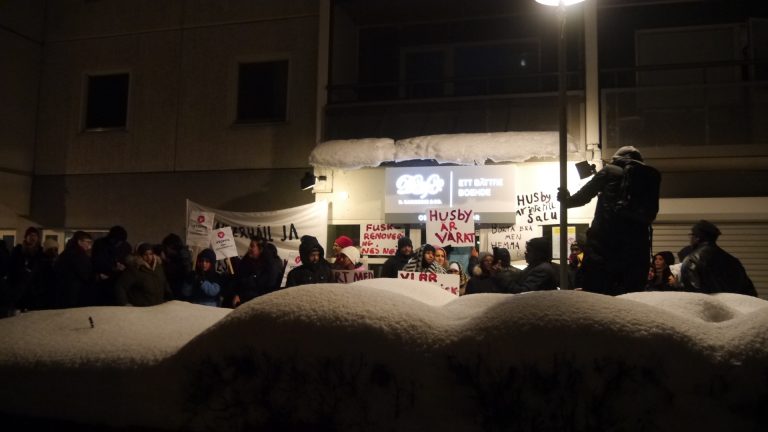 In the meantime, in 2009, the Swedish government – via the Delegation for Sustainable Cities – decided to provide funding to the City of Stockholm for a project called "Sustainable Järva – Re-building the Suburbs". In 2010 the project was kicked-off to promote sustainable development in Järva. The project, more specifically, sought to regenerate Järva through energy efficiency renovations, local renewable energy production, and promotional activities for sustainable lifestyles.

The local authority changed its communication style and initiated the so called Järvadialogen (Järva dialogues), which engaged representatives from all groups and segments of the population in a dialogue process. The Sustainable Järva project was determined to continue rebuilding the residents` trust and relation to the city. Part of the project’s success depended on involving residents through extensive investment in information and dialogue (people became confident in the project and they became motivated to participate). The aim was to improve energy efficiency in 350 homes, in seven apartment blocks. These renovation interventions sought to improve, among other aspects, energy efficiency in an effort to halve annual energy consumption, from 180 kWh/m2 to 88 kWh/m2.

The Delegation for Sustainable Cities was appointed by the Swedish government in the years 2008–2012 to promote the sustainable development of cities, including the allocation of financial support for urban development projects.

The municipal housing company Svenska Bostäder developed the concept for the Järvadialogen in cooperation with the Swedish Union of Tenants and the city of Stockholm.

The Royal Institute of Science and Technology (KTH) was hired and responsible for the evaluation of the project.

Various city administrative departments worked on the project (mostly the building and city planning department, as well as the traffic office, and the Stockholm water and waste management company – Stockholm Vatten).

Local residents were included in a deep participatory process with Svenska Bostäder and the Swedish Union of Tenants. In addition, residence hosts were appointed to make the discussions more accessible for all residents.

The Sustainable Järva project was established as a pilot project for a planned sustainability profiling of all of Stockholm’s "million homes programme" areas. With new technology, information, and education and as a result of its focus on improving safety and security, Järva should become a model of sustainability, promoting environmental responsibility and energy efficiency while still preserving the area’s unique cultural and historical values.

Approximately 10,000 people participated in the process and about 30,000 opinions were collected to improve the neighbourhoods. Of the 30,000 opinions, only 20% were about the residences. The main emphasis turned out to be on schools, outside areas (safety), traffic, and other conditions. The residents were invited to provide input and suggestions for other measurements and workshops were carried out. One of the activities that was included as part of the consultation process involved a heat map, on which residents were asked to mark positive or safe areas with a green dot and negative or unsafe areas with a red dot. 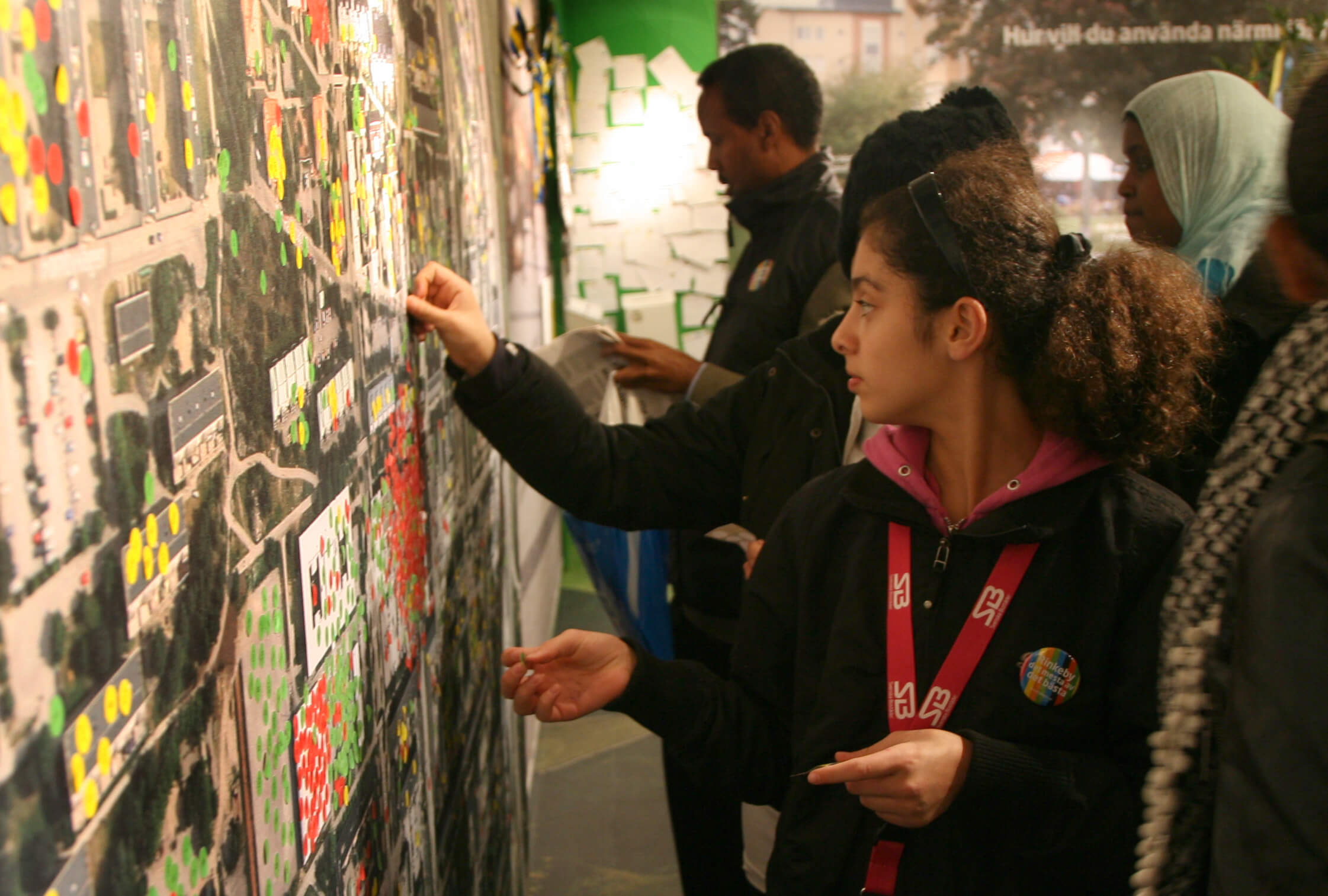 Residents were also consulted prior to each building renovation and were involved in the decision-making process at both the building level and apartment level, as the renovations aimed to improve living as well as energy efficiency standards. Furthermore, households were given information and courses on reducing their carbon footprint, including content such as waste management and efficient use of water and heating.

Every resident was given a vote for what level of upgrading should be carried out in their apartment, which would directly affect the rent. At the building level, tenants worked directly with architects to agree and vote on a proposal. At the apartment level, tenants could decide on a variety of items, such as flooring, kitchen furniture, etc. This voting was part of an effort to strengthen local democratic processes. This was eventually made anonymous in order to promote women’s voice, which proved to be very effective. In this regard, the establishment of women networks was a supporting structure.

Overall, there were a number of measures related to social inclusivity in the "Sustainable Järva" project:

2011-2014: Successful implementation of the pilot project 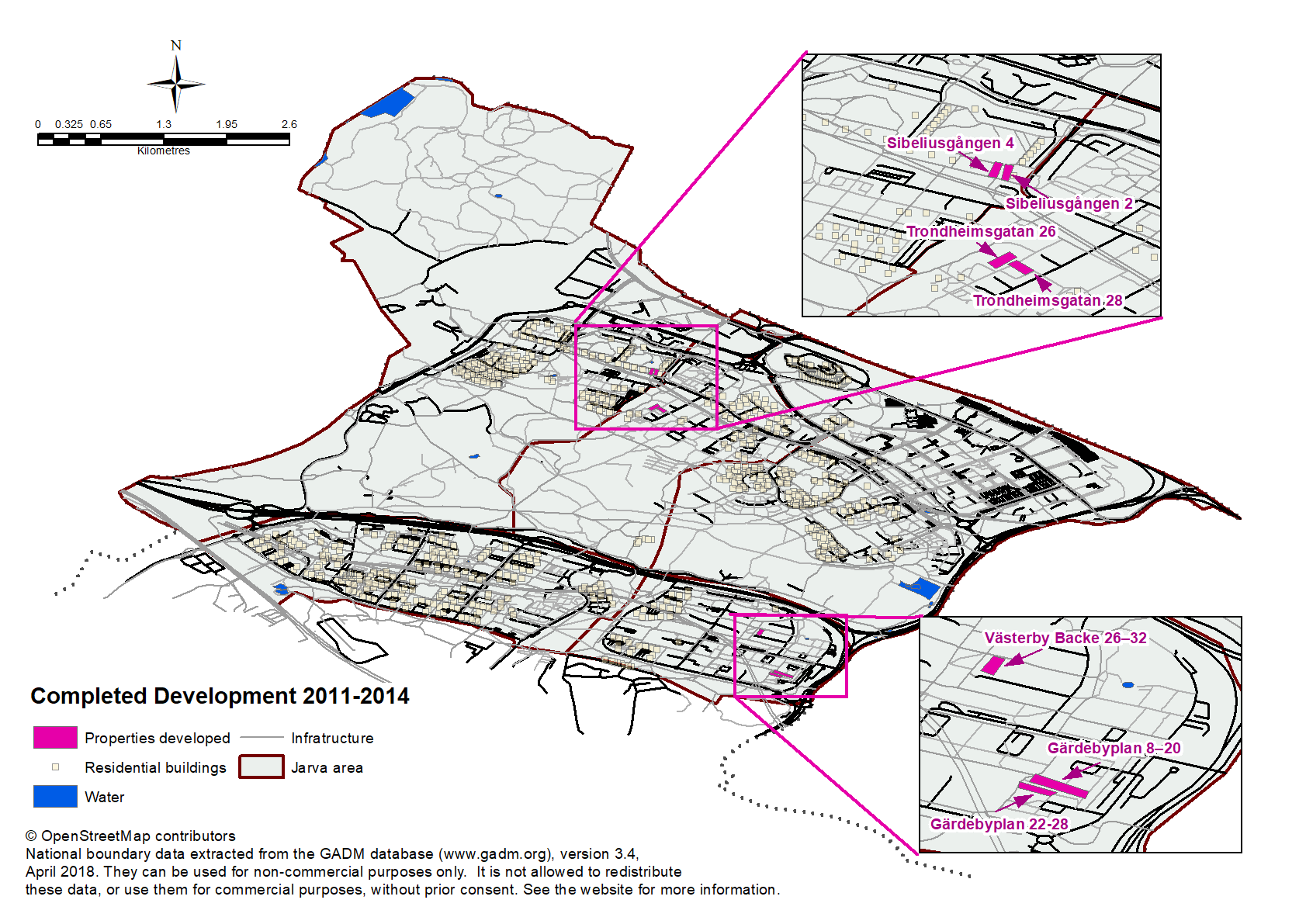 In 2014, the project was completed. Given its piloting role for all of the "million homes programme" areas, the "Sustainable Järva" project was revealed as one of the finalists in the 2014 ManagEnergy awards by the European Commission.

Svenska Bostäder and the City of Stockholm reflected on the process and decided to continue with some of the positive new procedures that were developed. In addition, the Royal Institute of Science and Technology (KTH) began its evaluation work to learn from the project’s activities.

Well-designed resident participation represents an important social innovation in the case of Järva. In total, ten measures were identified and implemented to achieve a more sustainable Järva:

As a result of the positive outcome of the project, the dialogue format that was developed from it had grown into a standard procedure for planning future neighbourhood refurbishments. The organisational learning in the city administration and the housing company can be considered as the change in social relations and hence a social innovation.

As an outcome of the project, Järva had 10,000 m2 of photovoltaic installations on approximately 40 roofs, making it one of Sweden's most densely equipped areas in this regard. Different types of housing have become more energy-efficient and sustainable transport and cycling measures were made throughout the Järva area. The city’s commitment to facilitating and promoting the use of bicycles included the implementation of a loan-a-bike facility, signposting improvements (for bikes), an annual cycle week, and free cycling courses for adult residents. Overall, it can be stated that, thanks to the implemented energy solutions, the neighbourhood had transformed considerably and the social interventions have generated an increased feeling of safety and well-being. 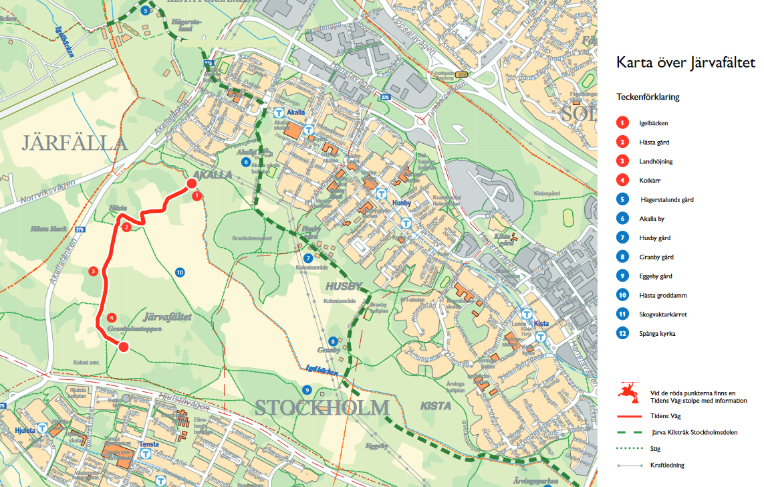 Ultimately, the project also created a cultural-historical link to the area, connecting its past to the future with regard to climate change. The Stockholm City Museum began to raise awareness of the area and increase pride in living in Järva through an initiative called "Tidens Väg" (The Path of Time): a new, signposted educational trail through Järva, with information about the area’s past and present. 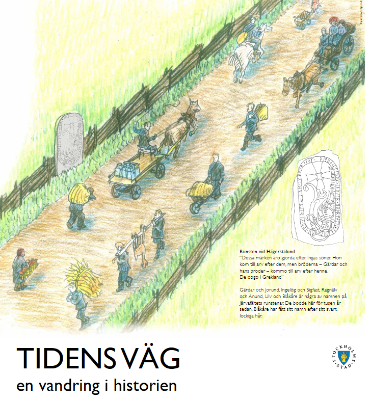 As a result of the retrofitting experience gathered in the project, the housing company Svenska Bostäder plans to refurbish 5,200 apartments in the city by 2022. Furthermore, it cooperates with schools in strengthening social work efforts in the area; property managers and service personnel are trained to spread knowledge about sustainable lifestyles. Residents are informed about how to save energy and how to sort out waste at the source. More than 150 leaders from local citizen and neighbourhood associations have been educated in environmental issues during the project. They have since had study circles where different environmental issues are discussed.

The total cost of the "Sustainable Järva" project was 200 million SEK, of which the governmental funding was 55 million SEK. The result is an improved general impression of the neighbourhood, especially for the facades and outdoor areas. This has contributed, along with sustainable energy interventions, to increase the pride of the community and its perception of self-worth, because the sustainability profile of interventions were consistent with normative environmental values and the place attachment of residents.

In the exploration section you will be able to take a look at some alternative policy scenarios in the case of Stockholm – and how they have been modelled using Agent-based Modelling (ABM). Before you explore the videos, find out what ABM is about in the introductory video below.

Now, you should be ready for the policy scenarios. For the Stockholm case, you can explore two scenario runs. The scenarios look at the impact of the district regeneration rate on the acceptance of the measure.

We hope this Policy Sandbox Tool storyboard provided some interesting insights and ideas for supporting energy and mobility transitions.

For a final refection on the ABM models that you have seen in the exploration section, see the video below.

For more information on the cases, we invite you to take a look at the following resources:

BACK TO ALL CASES